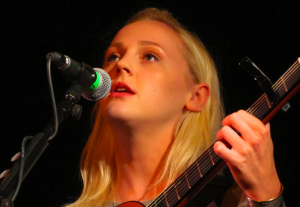 Laura Marling’s hotly-anticipated 3rd album is out on 12th September, and it’s live on the Guardian website to listen to in full.

Titled A Creature I Don’t Know, it’s Laura’s first album with her own band – the Mumford boys provided the backing on the last one and Charlie Fink of Noah & the Whale produced her debut.

She told The Guardian “With the first two albums – Charlie produced Alas I Cannot Swim, and it’s as much his album as it is mine, and with I Speak Because I Can, the style of the drumming and the bass playing is very much a representation of the characters who were playing on that album, and Ethan [Johns, the producer] stepping in as well. This time I thought: ‘Well, I’ve got the confidence now, and I know what I want it to sound like, so before anybody else gets their grubby mitts on it, why don’t I put my stamp on it?'”