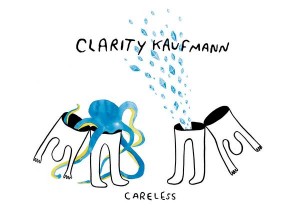 A chance meeting between Korean artist Maia Ruth Lee, and British musician Christopher Knowle at a bus stop in Northern Italy gave birth to Clarity Kaufmann, a folk/electro crossover act. We sent in the panel to assess the results.

James Rutherford: There is no doubt that Clarity Kaufmann’s debut LP, Careless, shows a great deal of promise and I really want to say good things about it but there is a problem. The missing link in this album is that all too often the music just fails to engage. All the elements are there, the fragile vocals, sweet and earnest lyrics and sparse compositions are technically accomplished, however, they too frequently combine to become less than the sum of their parts. Similarly, the video for Penguins whilst quirky and clever, left a somewhat empty feeling, although Seaweed Soup is a highlight, the varied tempo giving it a welcome kick. There is a new album slated for release in the autumn and I await it with interest because Clarity Kaufmann are very close to getting it right.

Alice Knapp: At first listen Clarity Kaufman’s voices recall the clarity of early Joni Mitchell or late Nick Drake. Most of their songs emphasise these harmonies, and they keep the backing guitar simple but appealing on songs such as Penguins. The similarly calm Seaweed Soup demonstrates excellent production and more complex instrumentation, using gentle drums and electric guitar. Their experiments with a drum machine and strings on Have You feel a bit laboured and detract from the vocals. However, it would be interesting to hear this aspect developed to find a middle ground between these two sounds.

Alice Sage: Clarity Kaufmann remind me slightly of a Kaufman/Gondry movie or an emotionally stable Dory Previn. The sound is intimate, small and warming – one careful guitar line dawdling over another, one smoky, wispy voice crossing the other. Only four tracks make it onto their MySpace page, and I have a feeling that any more could be irritating as this style of music reaches niceness saturation point pretty quickly with me. However, these two guys seem to know when to change tone or tack and not let the knife-edge of simplicity flip over into boring. I would be intrigued to hear a lot more from them. More than promising.

Check out Clarity Kaufmann for yourselves here.

← The National and Phosphorescent team up for UK tour
Album: Antony & the Johnsons – Swanlights →