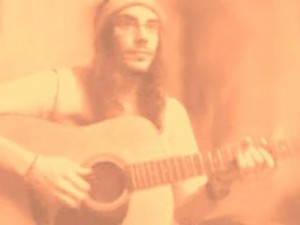 Dan Gubbins works under the name Silent Paper Radios, and while there is no doubt something fragile about the music he makes, our panel found you should certainly make sure the volume is not too low.

Alice Sage: Pared-back but accomplished, sweet but unaffected – this a mix many strive for but few manage. I could listen to this all day. His voice is airy and breathless, the hand-claps and finger-picking carry deep warmth and affection, the occasional backing vocals are restrained and efficient. This is a style repeated so often it’s almost a genre of it’s own – post-Rice-neo-folk, perhaps? However, this epitomises a sound, rather than apes it. The whole EP is luscious and gentle, with no tracks jumping out at me as worse or better than any other. This is music to listen to alone. At worst it’s a lovely background murmur, at best it is consoling, dreamy loveliness.

Joe Skrebels: Dan Gubbins’ one-man finger-picked folk project, Silent Paper Radios, apparently emerged out of a thwarted desire to make electronic music and draws on Devendra Banhart, Can and Miles Davis – all influences with a lot of ideas. Unfortunately, that key concept seems to have been lost somewhere in Gubbins’ transformation. His Under The Stone EP is five tracks of vocal-driven acoustic folk that never quite shifts out of first gear. Undoubtedly, it has a heart and emotion that many artists fail to muster in their music but, aside from the addition of an extra vocal track, a xylophone and the merest tap of percussion in the title track, this EP ends up leaving you yearning for more, and not in a good way.

Eala MacAlister: When Dan Gubbins decided to call himself Silent Paper Radios and start creating folk music instead of electronic music it was definitely folk music’s gain. The minimalist instrumentation enhances the songs without taking away from the meaningful lyrics that the songs are built on. Under The Stones is the most upbeat and has the most instrumentation with banjo and glockenspiel being heard alongside the usual vocals and guitar. Eye Lids is perfectly played guitar with stirring vocals and is similar to many singer/songwriters which is no bad thing. This is the kind of music that would make you want to take to the fields on a summer’s day.

Check out Silent Paper Radios for yourself here.