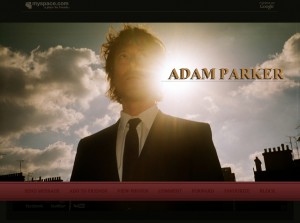 Adam Parker first came onto the scene two years ago, but it was the dance scene. DJ Sasha had heard some of his songs and ended up featuring remixes on his Invol2ver album. Two years on, it’s finally time for Parker’s own debut to come out, but left to his own devices, there’s more of a folk-tinge to his pop songs. The May release of Smart Man earned him some attention, and our panel figured it was time to see what the fuss was about.

Jono Ganz: Adam Parker writes sublime pop songs. The singer/songwriter sways from the infectious, half-electronic pulse of Forget the Wood to the similarly infectious, acoustic urgency of Smart Man, maintaining a distinct, slightly tragic atmosphere. The smooth (yet slightly eerie) track K3 stands out: the jazz-inspired vocals and quivering strings would not be out of place alongside the opening credits of a James Bond film. Parker takes a leap away from this subtlety with the insistent drive of Smart Man, his latest single and yet another fantastic piece of songwriting. Adam Parker’s music isn’t groundbreaking, but this is by no means a bad thing. He has a penchant for writing catchy melodies, and if the songs on his MySpace are anything to go by, his forthcoming album, Call Me A Medic, will be a very impressive listen.

Ian Parker: There’s nothing particularly original about Adam Parker’s brand of punchy, upbeat indie-folk, but that is not a problem in itself. He combines his simple guitar melodies with some strong rhythms to create a deeper sound, akin to the likes of the Black Keys’ more recent collaborations with Dangermouse. It’s easy to see why he drew the interest of DJ Sasha, and while he’s not breaking down any boundaries, if he can keep churning out catchy hooks like those he has come up with so far, he could do well.

Alice Sage: Adam Parker’s voice is raspy and unshowy but pleasantly melodic, with a slight yank twang, which could become irritating but isn’t. There’s a definite sexy darkness to his slow, rhythmic beat and softly-softly voice. His lyrics are chantingly repetitive and his backing is a pared-down drum machine with a plinky keyboard sound that gives rich depths – some of these aspects probably reflecting the influence of his collaborator DJ Sasha and his brief (6-year) sojourn in LA. Stand out track Forget the Wood is a gem of gently building longing and sexiness. New single Smart Man is exciting musically, but not quite convincing lyrically – a little too political for me. Not groundbreaking, but I’m liking it.

Check out Adam Parker for yourself here.