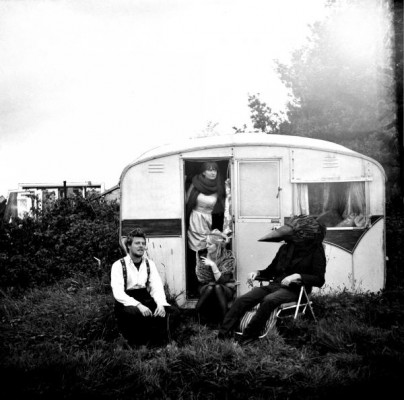 Chris Belson: Please don’t be put off when I say that Foxpockets first come across as timorous. In no way do I mean this in a negative sense. In fact, it’s a virtue and the more you listen to their recent E.P The Coracle and the Albatross the more you realise how charming their coyness is and how fundamental it becomes to the pleasure that you can draw from their music.  Instruments, like the harp, accordion, banjo and glockenspiel, delicately tiptoe into timid but sincere folk songs. All of these elements frequently begin to interweave and respond to each other and gradually become quite complex and at times it remind me of hearing a piece of fine clockwork click into motion. Despite their immediately apparent origins, their roots seem to stretch much further than just traditional British folk music and very often reach over into a more European tradition, sometimes even breaking into Polka. Perhaps this is the influence that gave me the feeling that as I listened, I was following a trail of breadcrumbs into the heart of a fairytale.

Nicholas Franks: On this EP of “modern day fables”, Foxpockets mix their folk-pop sensibilities with pagan traditionalism. If that sounds like a potentially horrific car crash of sounds then fear not – there’s enough in the delicate instrumentation, detached vocals and eerie lyrics to steer these songs in an intriguing and impressive direction. On the surface the band’s sound may seem like a pleasant enough exercise in pastoral folk, however there’s a dark undertone to each song. No more so than on the haunting Grendel, which would fit right in on the soundtrack to The Wicker Man, with its gruesome lyrics (“He might rip off your head, he’ll grind your bones to make his bread”) befitting of a sadomasochistic folk sing-a-long. And luckily Foxpockets seem to agree with me that the phrase “less is more” was coined with the banjo in mind, as shown in its understated use on the fantastic The Nautical Song. Time to party like it’s 1899.

Damien Girling: Clearly there’s something in the water. Presently, Brighton appears to be blanketed by thick, black, clouds. For its musicians are seemingly drawn towards music seduced by pathos. Last year saw the emergence of the excellent, gothic drenched, Esben And The Witch and perhaps 2011 will see the rise of Foxpockets. Where Esben And The Witch draw their influence from post-punk, Foxpockets revel in nautical themed folk revivalism. This aquatic fancy serves them well – as it gives the band a keen sense of identity amongst the legions of bands following from the success of Mumford & Sons and Laura Marling. It’s what one might imagine the offspring of a Neutral Milk Hotel and Beirut affair might resemble, were it to be conceived whilst out at sea. Foxpockets write willowy melodies that are both sombre and jaunty. They are certainly one to watch out for.

Listen to Foxpockets for yourself here