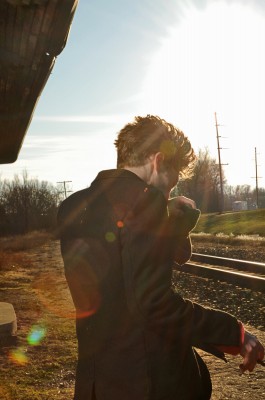 Nomadic Americana artist James Apollo is over in the UK ahead of the release of his second album available to us Brits, ‘Born Lucky’. It’s a compilation spanning his 6-year career. To celebrate his visit to this fair isle, he picked out his five favourite British-ish folk-ish artists for FFS.

Elvis Costello
Elvis probably introduced me to American folk music. That King of America record, produced by T-Bone Burnet went along way to get me out of my teenage California punk tunnel. American teens love California punk. Which in turn led to Costello, which in turn led to everything else. I’d like to hang outside that man’s house on trashday and see what records he’s throwing out. Costello’s always a few ticks ahead of the pack

Richard Hawley
I was down and out and pretty sick of songwriting when someone gave me Coles Corner, the first Hawley record I’d heard. Hawley was another artist that took a really honest American sound and perfected it. Like the Japanese with cars. The lap steel sounds like Tennessee, the production sounds like Sheffield, and the voice sounds like god.

Josh Caole
Oh, have you not heard of Josh Caole? He’s from Cardiff. He plays the kind of rootsy folk that makes me want to stare at raindrops on a windowsill and hum along. Slow Hearts is the name of his new record. He also plays piano in my band. He’s also driving the tour van right now. You might call that a jack of all trades. You might call him a good man to have around.

Bonzo Dog Band
Are the Bonzo dog band English? Are they really folk? I don’t know. They are super goddam weird. Tom Robinson from 6Music played it for me for the first time a few years ago and I was hooked, it’s the kind of strange you can’t turn off for fear the band might be watching you from outside the window. Or you just want to find out where they’re gonna go next.

Vashti Bunyan
Sure, I heard about Vashti from the psych-folk revolution that’s been going on the past few years. She almost doesn’t sound human. Normally a bunch of flutes and harps would not keep me on board, but Bunyan is mighty persuasive. Let’s make everyday a diamond day.

James Apollo – The Violins from Papa Escalante on Vimeo.