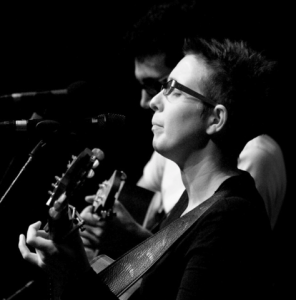 It had been a hard and gratifying spring. I was all lean muscle and mudstains after months of climbing trees at the Manchester airport protest camp and feeling good from all the fresh air, living in benders, hitching, cooking outdoors and dangling from blue polyprop.

I’d helped build treehouses, had close encounters with owls, been woken every morning by jet engines and nearly fallen into the latrines on many occassions. I’d also learnt that tunnelling wasn’t my bag when I crawled on my belly into the poorly-propped clayworks that then-celebrity protester Swampy called home, to help him bag-out earth. In short, I was having a great time.

And then someone played me Joni.

I don’t know why Blue seemed so very perfect at that particular point in my life but I swear hearing that album for the first time shifted something in my brain. I was already toying with the idea of playing guitar and writing songs, sensing that my rather high and gentle voice was aligned more with ‘folk’ and the American songwriting explosion of the ’70s than with the rough-and-ready campfire songs I was hearing on the protest camp.

Singing so sweetly and with such strong melody lines, Joni just seemed to make a lot of sense and ‘Blue’ had just enough life and attitude behind it to make it an album I became addicted to for a good while. It became something of a soundtrack for me, caught up in the battle to save the woods from the encroaching tarmac, working as a journalist for an ethical magazine and hitching into work covered in mud and jingling with climbing gear. I guess I had a Joni summer.

I didn’t explore Joni’s other albums. Blue was enough for me. It was full of beautiful songs, patterns of light and shade and a warm, intelligent voice intense in its curiosity, learning lessons, breathing, speaking to me.  It wasn’t till much later when my life started to spin off in an unexpected direction – a misplaced crush, a broken relationship and a breaking of old ties – that the same person who first played me Joni remarked he expected me to like the album, not to live it. It was pretty much too late at that point.

I haven’t listened to Joni for over ten years now. I know she’s good, it’s just hard to listen to music that you came so close to. Sometimes when you hear a snatch of music you loved that much it’s a bit like catching sight of an old lover in the street.

It makes you catch your breath. And it brings back too many memories…

Find more from Kirsty McGee on her website www.kirstymcgee.com