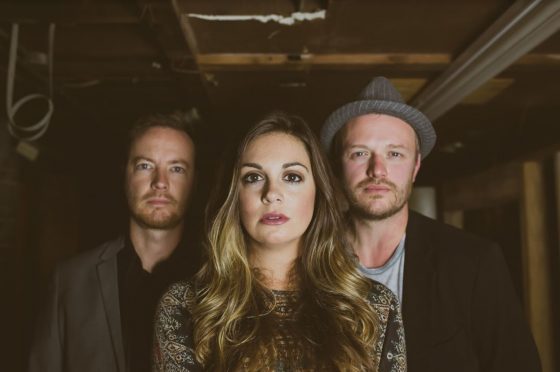 With The Weary Traveler, The Deep Hollow get about doing a whole lot of living. This comes even in the light of lamenting the act of getting older, let alone all of the emotions that tend to come out over the course of any journey on the road. In other words, they’re Americana, defined, firmly rooted in storytelling roots that are often autobiographical. Taking a page from the likes of other open-road folksters like Patty Griffin and Jason Isbell, the band’s three-part vocals complete a soulful roots sound is sure to relate a warm shoulder to lean on for many listeners.

Please tell us a bit about yourself. Where are you from and how did you get started in music? Any defining moments along the path to present day?

We are from Springfield, IL. The Deep Hollow is only a few years old, but the three of us have known each other for many years. Dave has fronted a rock band called The Station for several years and I have had a band called The Micah Walk Band since about 2005. Those bands aren’t quite as active as they used to be, but we used to play similar circuits and shared some bills and beers together. In the early days of those bands, we hadn’t met Liz yet. At that time she was busy with theater type stuff, recording some solo material and being on American Idol.

It was actually a cover band that brought us all together. I had a side project that played covers to supplement income. Liz joined that band kind of by accident when our original lead singer was sick and we needed an emergency fill-in. Then, when an opening for a guitarist became available in that group, Dave filled that spot. Dave and I had yet another – short-lived – original songwriting project during this time, too (I know – a LOT of bands!). So, the three of us were in the cover band for a few years before we even came up with the idea for The Deep Hollow.

Liz and I were on our way back from a cover band gig and realized we had some similar tastes and influences – singer/songwriters and Folk/Americana type acts. We decided to try writing some songs together. I think we came up with about 4 songs in our first couple of writing sessions. If I remember right, Devil and Fires (from our debut) were in that batch, along with a song called Fall, which is just now being released on our new album. We were playing gigs as a duo for the better part of a year. At the same time, the project Dave and I had been experimenting with was kind of falling apart. Dave also mentioned he had some new song ideas that might work well in The Deep Hollow. He sent us some quick iPhone recordings of the songs and Liz and I loved them. I remember Beginning and the End (from our debut) was one of those. Liz and I had a gig booked later that week and we invited Dave. The very first time we all sang together was that song, at that gig, in front of a crowd, with no rehearsal. We heard our 3-part vocal blend for the first time along with the folks in the audience at that show. That was a defining moment for us for sure. As soon as we heard that, we knew that was the sound we wanted to pursue and have been ever since. It took quite a few years and a weave of bands to arrive here, but we all feel that The Deep Hollow is a pretty special group.

As an artist, how do you define success?

Well, that’s a tough question! To be honest, I already feel successful. I’m not rich and I’ve never been nominated for a Grammy, but I get to make a living doing what I love. I’d say that’s one way to define success, at least monetarily. From an artistic standpoint, though, success for me is writing from the heart and having folks listen. It’s a great feeling to create something you believe in and have folks accept it.

What do you find to be your greatest struggle when it comes to the music business?

The music business is struggle, haha! It’s hard to even know where to begin. Money is a big one, though. It takes so much money to record and release music, even on a small scale. And with the record industry being the way it is now, it can be hard for an artist to recoup those costs. It can truly be a labor of love at times. We’ve been extremely fortunate to have amazing fans who have crowd-funded both of our albums.

What do you think is the most realistic goal you can achieve as an artist/band? What do you hope to achieve?

That’s another great question. Honestly it’s a tough one to answer. I get so caught up with the day-to-day tasks it takes just to keep up with basic stuff that I sometimes forget to think about the big picture. It would be pretty great to sell out a whole tour of theater shows, though! That’s probably realistic, depending on the size of the theaters, ha! What I really hope to achieve is a body of work that’s comparable to songwriters like Gillian Welch or John Prine. I’m not sure how realistic that is, but I’m working on it!

Outside of music, what do you like to do that you feel contributes to the creativity that you tap into for your music?

This might be a boring answer, but exercise and yard work! Liz came up with “Carry Me Home” while on a run, and I often do some songwriting while running. For me it’s a good time to do some editing – maybe a lyric improvement or even finishing up a verse or something. Same with yard work. I often get melodies stuck in my head and before I know it, I’ve got freshly cut grass and a song’s worth of lyrics for a certain melody. I remember coming up with the verses to Real Life while cutting the grass. Driving is also a big one for me. I recently wrote an entire song while on a solo road trip. It was inspired by an episode of This American Life. That happens a lot for me – podcast-inspired songs during a drive.