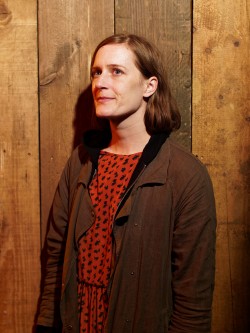 There is no getting around it. Laura Gibson’s voice is quiet. On stage, protected by the hushed anticipation of a near-silent crowd, that is much of what gives Gibson her power as a performer. That and her knack for a subtly haunting refrain. But in the bar beforehand, surrounded by city slickers enjoying their after-work drinks, it’s far from ideal. Luckily for me, Gibson is sympathetic to my plight and indulges my experiments with dictaphone placement — even letting me drape it over her shoulder temporarily. This, we decide, is not going to work. Finally, with no hope of respite from the Hoxton Bar and Kitchen’s dance music soundtrack, we simply huddle up a bit closer and lean in to discuss Gibson’s new record Empire Builder and what else she’s been up to since she last graced our shores with her beautiful brand of nostalgic country-folk.

How did you make this record?

Laura Gibson: I’ve been studying so it was made over a long time, stretched out over a year. The band began as me and Dan (Dan Hunt of Neko Case band-fame), who I have been friends with for a while. I’m a big fan of his drumming. Then my long-time friends Peter Broderick and Dave Depper came on-board, because it just happened that they were around in Portland. We recorded most of it at my co-producer John Askew’s house, in the basement. But we did some string arrangements in Brooklyn and guitars at Peter’s house.

How much did you collaborate with your band?

LG: I’d written all the songs before we started recording but lots of the arrangements were collaborative. I had a lot of production ideas in my head — I always have some things pretty planned and sometimes I will say – “This is exactly how I want this violin to go”. But there is so much energy and fuel in the studio that there is a lot of discovery.

One of the biggest things I’ve learned is knowing when to trust my instincts. Even working with musicians who are so amazing and have their own voice, I’ve grown to a point now where I know what I want so that we can collaborate really well. I can say no now, even if it’s a really cool part.

Were you part of the mixing process too?

LG: Yes, that’s one of my favourite things. From the very first record when I didn’t really know what mixing was, I was immediately really into that process.  It’s really fun.

How was grad school?

LG: I’ve been doing a two-year fiction-writing program in New York and I’ve got about a month left.  When I get back from tour I’ll have two weeks to finish my thesis — it’s an 80 page hodge-podge of some interconnected Oregon-based short stories and the beginnings of a longer piece about these jazz musicians in the 30s and 40s.

Has your studying influenced your songwriting?

LG: Yeah. I’ve been reading two books a week for school, so just being immersed in words that much of the day has.  I also think that for this record I tended to use more specific imagery than I had in the past, I wanted to be a bit more concrete and direct in what I was saying. That definitely came a bit from fiction writing.

Have you brought more fiction into your music?

LG: It’s always been in there. I think often you can find truth through fiction. So I have a line about clementine peel in ‘Damn Sure’ and there may not have been clementines, but it’s a way of using imagination to get at the truth. Letting your imagination paint scenes. I think there is something in fiction where you can be a bit freer. It’s almost like you trick yourself into revealing yourself.

I’ve done that so often where I’ve thought I was writing a song about this other thing, and then by the end of the song its like “oh, it’s about me”. In the end it’s always pretty personal. ‘Damn Sure’ was one of those, where I was trying to write about someone else and eventually it morphed nearer to my own story.

Is it important to you that people understand what you are saying in your songs or would you rather it remained a bit abstract?

LG: One of the great pleasures of songwriting is that you always have these little inside jokes with yourself, that perhaps only you, or you and one other person will know what it’s referencing. On this tour my band-mates will ask me about a line and I’ll say “Oh yeah, that’s from this conversation I had with so-and-so”. It’s so enjoyable to drop those little clues, even if its only satisfying for me. 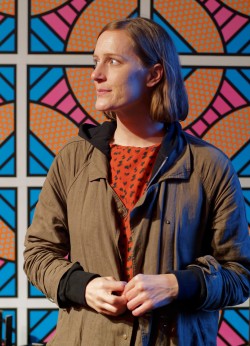 And are you happy explaining those meanings now that people are starting to ask about them?

Do you ever use your songwriting to say things that you can’t say out loud?

Yes, absolutely. For example, ‘Empire Builder’ — before I wrote that song I really wasn’t sure that I was going to make a record. I was going to grad school and it was a new season for me. But then I wrote that song and it felt like I’d written something that I’d been trying to say but felt unable to express in other way. So then I thought, “Well, now I want to make a record!”

I really love that. Music never fails to surprise me in that way — that helps you to say the unsayable. That’s what keeps drawing me back into songwriting and this somewhat absurd lifestyle.

Why did you think you might not want to make another record?

LG: Coming off of the last record I felt like maybe that was all I had to say to the world in that way. I love music but I love a lot of other things too and I want to have a wide and varied life so I thought I’d try to do these other things — writing fiction and teaching and putting ideas together about art.

But then you play a show, like my show in Manchester last night, and think “of course I’m going to do music”. I love writing songs and that miracle that happens when you write something really private in your room and then it makes a connection with other people. So it always pulls me back in.

In a couple of your songs — ‘Not Harmless’ and ‘Lion/Lamb’ from the last record Le Grande — you seem to be protesting your strength. Do you ever wish you had a different voice to make those statements?

LG: Someone recently trolled me on Twitter with the hashtag ‘mouselungs’, which is the most adorable trolling ever. And I do have limitations to what my voice can do, but I think people’s idea of strength is often quite skewed. There can be strength to quietness and some of the people who seem the meekest in the world are actually very strong.

What’s next for you?

Once I hand in my thesis, I’m rolling right into touring. Then writing a book, hopefully.