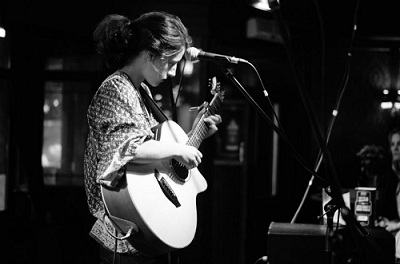 For Folk’s Sake’s Joseph Merriman talks to Sophie Jamieson about deep-pocketed European audiences, assembling a band and her love for Polica.

Have you found your aspirations in life changing as interest in your music has increased?

Yes. My attitude to my music has always been to take one step at a time, see how things go, never assume anything, never expect anything. Which means that my aspirations have ended up changing on a regular basis as the situation with this music changes. When you realise you can reach a wider range and number of people, it makes you think a lot more carefully about what you’re doing, how much time you are spending on it and what you can do to ensure it gets better and better.

How did you meet the band?

I met them one at a time, over the last year and a half. Liam, my guitarist, played banjo and mandolin with a folk band called Patch and the Giant who put on monthly gigs at The Boogaloo in Highgate, one of which I played. After my set, Liam asked if I needed an electric guitarist, which I had recently decided I did, which was pretty perfect. It soon became clear we also needed some bass – so Liam got his friend Alex, from his uni days, along to play with us and everything sort of clicked. Our drummer, Amos, left Fanfarlo in March last year and a mutual friend mentioned to him that we were looking for a particularly sensitive sort of drummer. He came to loads of our gigs and we got to know him for about 5 months before he even started playing with us. When he did, we knew we’d found the perfect guy. Our band finally feels complete.

You’ve previously said playing with the band has changed the way you write music, as you write with them in mind.  Do you find yourself writing in additional instruments or are you happy with the numbers?

As the live show is such an important part of what we do, I tend to try and write with the aim to push the instruments that we have and to make the most of them. I have always thought that having limitations can make you more creative with what you’ve got. I’m not great at guitar but I know there are songs I wouldn’t have written if I’d been able to move my hands around the fretboard more. It can make you concentrate harder on the area you can cover, and to really get to know your instrument and everything it can do. Sometimes I find the feeling of being able to write anything, overwhelming, making it harder to find a starting point. Having said that, when you are working from the core of the song outwards, you can find there are other sounds that could make it better and accentuate certain parts – but then the challenge to translate that into our live show is something which pushes us and makes us better musicians.

Has Liam’s experience of guitar sounds/effects changed the way you view the guitar?

It has opened my eyes to the way you can use a guitar. The roles that my guitar and Liam’s take are very, very different. The effects he can use certainly open doors to creating atmosphere, space and a balance of tone and pitch within the band which we couldn’t achieve without him. But it is not just effects – playing with Liam for a year and a half has taught me how to use the second guitar to punctuate a song, push it up and down, accentuate the important beats, words and moments, rather than add unnecessary decoration.

At the gig, you and Alex said you preferred smaller venues as you’re used to them. Is it just familiarity or do small venues make for better gigs?

I think the reason small venues often work well for us is that they encourage people to be quiet and help create the intimacy and sometimes intense atmosphere that suits our music very well. But we have nothing against paying bigger venues! We also like to be thrown out of our comfort zone, and the more people there are in the audience, the greater a challenge it is to try and win them over. It also depends hugely from venue to venue as the architecture of a place can have a huge impact on the experience of both playing and listening there, rather than the size.

Did you notice any differences between the audiences on your European tour to your usual London audiences?

The difference was huuuuuge! It was bizarre. Everybody at every single one of our gigs seemed to have come along for the music and nothing else. They all seemed willing to pay to see an act they’d never or barely heard of and then buy an EP after too. It took me 6 months to sell 300 EPs when gigging hard in London – in Europe I sold almost 200 in 2 weeks. There is a great generosity of spirit in those audiences and they seem to place a very high value on live music and musicians, no matter how little-known they are. The attitude in London can be rather different.

Well, the music I listen to changes all the time and some artists who I am influenced by are quite different to us – Polica is currently pretty much my favourite band. The way they use percussion has opened my eyes to the greater variety of ways we can use ours. Their lyrics are also heartbreaking and their melodies wrenchingly strong – things that I finding hugely inspiring for the music I’m writing at the moment. I don’t think you’d pair us up as similar sort of acts though. But man, I would love to support a band like Polica. I guess that’s the dream. To support somebody you look up to, and hope to grow towards, rather than someone you just share a similar sort of ‘sound’ with but no musical ethos in common.

Are there any people you write your music for in particular?

I’ve never thought about writing for a particular kind of person. I would like to make music that can mean something to as wide an audience as possible. The artists I admire and whose music always hits me hardest are those whose lyrics seem universal, which are intimate and personal but at the same time huge. That is what I’d love to achieve. For me, writing and performing songs is about giving something to your listeners, whoever they are. Both the joy and the challenge of it is to give them as much as you possibly can.

Are there any plans for a national tour?

There are vague plans! That means, we’ve agreed we’d love to do a national tour. We are hoping for autumn time…but that remains to be confirmed and organised. I’m not very good at planning ahead. Our Europe tour has given us a taste for being on the road and we can’t wait for another adventure like that again.

Have you written much for the next EP?

The next EP is written, and in the process of being arranged and demoed. It is to be a little darker, denser and less innocent than the first one.

When do you see it being released?

We plan to record over the summer and release around Autumn-time but that’s difficult to confirm till recording has begun. If all goes to plan, Autumn, if not, probably early next year.