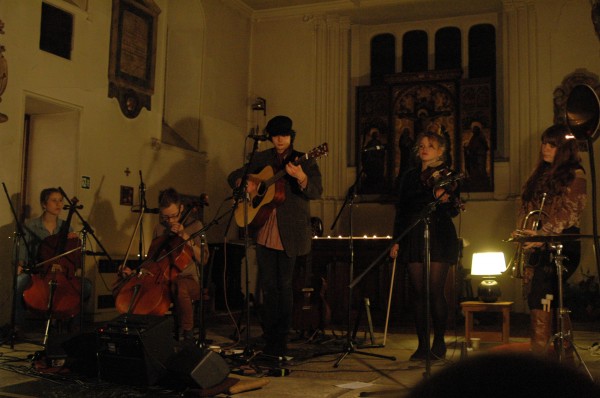 Inti Rowland is a 20 year-old singer-songwriter, currently writing and gigging in London. When FFS first heard Inti’s delicate voice, we knew instantly he had captured something unusual and very compelling. His lofty voice floats above gentle melodies, making one feel as though they should be residing on a cloud somewhere sunny. FFS managed to chat to Inti about what he’s been up to and some of his plans for the future… it really is splendid stuff.

Hello, my names Inti Rowland, I’m 20 and live and work in London, singing and writing songs of pleasure and shame, stories and dreams.

Tell us a bit about your last/lastest single?

On the 31st of January I’m releasing the second in a series of live church gig e.p’s, titled ‘Live At St.Pancras Old Church’, myself and my ever growing band have been headlining some churches around London and recording the gigs.

Played a lovely acoustic show in the chapel behind the Gallery Cafe in honor of Christmas with the whole band, it was packed and pin droppingly silent, a truly lovely audience! Comparable only with a first ever headline show at St.Marys in Stoke Newington.

Erm, well, I don’t know, I suppose I’ve never really thought about that. Perhaps, that people don’t give you free pieces of expensive cheese and gigs, I mean surely it’s come to light that money means nothing when cheese in fact aids one to see in the dark, or is that carrots? Well, either way, more cheese would be good.

People inspire me, people who work tirelessly throughout their lives for the people they love.

Build an ancient indian palace or an ice garden or maybe open a keep sake shop like the one out of bagpuss.

Out of your songs: which is your favorite?

Strange, I think it’s always hard to say with your own work I’m good at worbolling on about why other peoples songs are great, but its harder with your own. I’m very pleased with Summer Swallows which is a new one, yet to be featured on any records. I was away on a writing course in Shropshire, staying in the eerie old English house and hadn’t spoken to anyone properly in days, the whole thing just came together beautifully, I’ve never felt that i’d managed to get down exactly what i’d felt in such an honest way.

Well, I’m planning to do one more big full band headline church show, before I head into the studio in the early summer with the band to record a my debut L.P, we’re going to do about 13 songs, got lots of plans for arrangements and concepts most of it’s written but got a bit further to go yet, spend a lot of my time looking for a suitable location, I’m thinking a old factory, swimming pool or a tree house or maybe a castle.

I’ve been playing a lot live in London, alongside some great other bands, such as Patch and The Giant, Rue Royal, I think Josienne Clarke and Ben Walker are really great. I also love The Low Anthem, The Staves, Glen Hansard and Lisa Hannigan to name a few.

If you like the sound of all of that, make sure you check out Init’s music, and see here for more information, see here. For now, a personal favourite of mine: ‘Eyes of a Starling’.