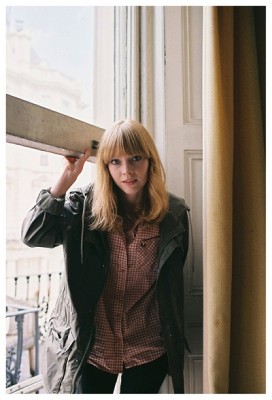 It’s hard to introduce Lucy Rose without saying she did backing vocals for Bombay Bicycle Club. Now we’ve got that out of the way, we can talk about the really interesting stuff, like how she’s gone from recording her debut album in her parents living room to playing at Somerset House, winning over a crowd of metal heads at Reading and Leeds and, tonight, packing out the Brixton Electric.

The interview itself is touch and go – Rose has been suffering from a bad throat and is reluctant to do press ahead of tonight’s show. It’s therefore with a sense of very good fortune that FFS wait for the BBC to finish their interview before being ushered into Rose’s dressing room. We find the diminutive girl with the trademark fringe in good spirits, if a little raspy – no trace of which can be heard in the later performance  – and unbelievably down-to-earth. In fact, ‘down-to-earth’ is a phrase that could have been made for her. The common perception of female folk artists as wide-eyed and other-worldly is a compelling one, but Rose is someone you could go to the pub with. She’s human, accessible and level-headed, unafraid to politely correct any slight misconceptions about her current success and career. This is what happened…

You’ve kind of exploded on to the scene this year. How has this come about?

Probably cos’ I brought my album out, but I think it’s a combination of 5 years of hard work and you get to a point where either something’s going to happen or it doesn’t. For me it doesn’t feel like I’ve exploded into anything, or that anything drastic’s happened. It’s been literally a slow build of just gradually playing bigger venues, more people hearing about it from different ways.

You know, I didn’t have any interest even at Christmas, I was unsigned, and I decided to self-fund my own album and record it in my parents’ living room. That doesn’t even feel that long ago to me, that was just January, February, March – and between that I was still doing things with BBC and just doing gradually more things, you know?  I’ve been releasing singles, and the radio’s been playing things, and people share things on Facebook.

You’ve done some pretty cool stuff this year: The Great Escape, Somerset House and so on. What’s been the highlight?

I think Reading and Leeds were really big for me. It was one of the biggest festivals this year, especially with Glastonbury not being on, and I didn’t think I’d get asked to play a heavy rock festival! It was really amazing – a wicked crowd and I had a really great day. I think it was one of the best days I’ve ever had.

How can you top that?

Who knows? I don’t know!

Your album makes beautiful but sometimes painful listening, and the material feels intensely personal.  Is it all based on your own experiences?

Yeah…I mean, I don’t want anything to be painful for people to listen to! Most of the songs are just emotions that I’m sure everyone’s felt at some point in their life and I just decided to write something about it. I would never think, “I’m going to write a song about this”, because it would be like – “Woah, that’s way too personal!” But then, you often find they’re the only things worth singing about really.

How does it feel sharing those experiences with such large crowds?

Many people know you from singing with BBC – was the plan always to go solo?

That was an amazing time in my life and it was wicked, I had loads of fun, but yeah, I wanted to be more than just a backing singer and I thought, “If I have the chance to do something, I may as well take it.”

When Jack Steadman from BBC did backing vocals for you on ‘Scar’ was it a weird role reversal?

With him it doesn’t feel like backing vocals…he’s one of the most talented people I’ve ever met and to have him – I think our voices just go really well together. We both enjoy each other’s music so much otherwise it wouldn’t work.

Did your own vocal come naturally or did you have to learn to sing?

I’ve never had a singing lesson in my entire life so I’m sure that if I did they’d tell me I was doing it all wrong! I wasn’t even a very good singer at school because my voice is very low and I didn’t even think I had a high range. So a lot of the time it’s me writing different things and experimenting. I remember once I sang high, and someone said, “You’re voice sounds nice high,” and I said, “Noo, I’ll never sing up there again!” Most of it is confidence I find, the more confidence I got the more I tried new things and I grew into it in a way.

We love tea at FFS, you sell tea at your gigs. Why?

I had no CDs, I didn’t have anything, and the same people kept coming to gigs and were really supporting me, going, “When are we going to be allowed to buy something?” and I was like, “I don’t know, I don’t know when I’m ever going to be able to record anything!” And I was just obsessed with this type of tea so I thought I’d make it –it’s just a mixture of Earl Grey and ordinary tea. It’s just light-hearted and a bit of fun, and I think people like tea. I think tea is an important part of life!

We make a quick departure so that Rose can rest her voice. Later, she’s just as natural and honest with the enormous crowds as she was with us, even picking out the faces of fans she remembers from previous gigs. This ability to connect translates to her music – razor blade folk not a million miles from Daughter –  and is alternately beautiful, light, serious and sad. It’s clearly why she already has such a devoted army of followers, all standing singing the lyrics of her life back to her on a rainy evening in Brixton. 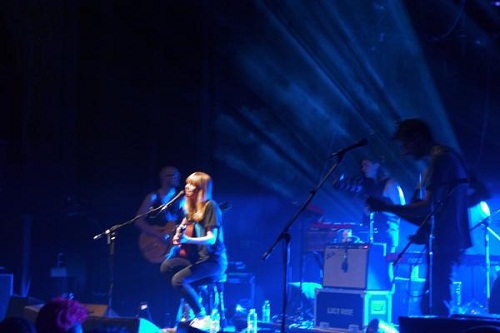