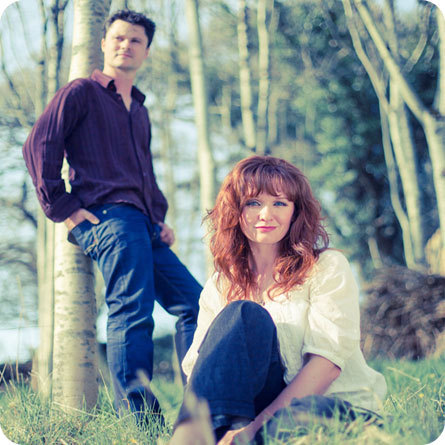 If folk were to have anything as bourgeois as a hierarchy, husband and wife duo Sean Lakeman and Kathryn Roberts might be prime candidates for the top spots. Initially part of folk super-group, Equation (also featuring Seth and Sam Lakeman and Kate Rusby), they spent much of the 90’s travelling the word and helping to revive modern folk in the process. The arrival of twin daughters resulted in something of a recording and performing hiatus, although Lakeman continued to play in younger brother Seth’s band whilst quietly carving out a reputation for himself as a folk super-producer. Despite critical acclaim from those in the folk world, the couple have hitherto flown under the more populist radar. This could all be about to change with new album, Hidden People, released last month and the couple’s first major commercial venture.

When FFS speak to them by the wonders of speakerphone they are down-to-earth and friendly, often finishing each other’s sentences. As in their music, the conversation is almost entirely equal – neither one dominates, and they present a remarkably relaxed and united front. As Roberts explains, this is the result of many years living and working together:

KR: Because we’ve worked together for so long in different situations, we’re just very much in tune with how the other person works. We don’t agree on absolutely everything but we never have massive arguments or stand offs…we both know whose strengths lie in a particular direction. If we’re having a small disagreement about where a song should go, very often we are both aware who really we should follow.”

SL: We’re very good at compromise! We’ll nail our colours to the mast but we’re very willing to try each other’s different approaches and then weigh them up on what’s best.

After such a long break, what prompted a return to recording new material?

KR: Well, we started last year, sort of by accident really. Sean was in the studio and found a lot of old, half-finished songs and things we’d not had a chance to pursue any further. We’d just hit a point where our children were reaching an age where I could start getting back into music a little bit, and Sean had a little more time away from Seth Lakeman, and the stars just realigned for us. We couldn’t set aside a dedicated 2 or 3 weeks to get it all done in one fell swoop,  so we did an afternoon here, a session there and it became a very relaxed way of recording – there was no pressure, we didn’t the feel weight of any expectation, we just took our time.

Roberts has described her life as being ‘roses around the cottage door’, but the new material is anything but. Hidden People delves into the darker, supernatural and even gory side of folk, often utilising minor keys and haunting arrangements. She describes this as ‘reverse therapy’, an outlet for her ‘little dark streak’ in an otherwise happy and contented life. For Lakeman, a childhood on the bleak expanses of Dartmoor has enabled him to tap into the less chirpy vein of a genre which, traditionally, tends to the darker side. In this way, Hidden People owes much more to traditional ballads and old English song than much of what we call folk today – does he feel that the true essence of the genre is being lost?

SL: No not at all – I think the traditionalists have succumbed somewhat in the last few years in accepting that they can’t keep their music as some sort of museum piece. It has evolved and it has to remain relevant to people living in modern society. It’s all very healthy really.

One thing that has remained central to the ever-evolving folk genre is the art of storytelling, and Hidden People is nothing if not a collection of stories and voices. Roberts describes this focus on story telling as the result of a grounding in traditional music:

KR: The traditional canon is about telling stories. That for me is what I’ve always liked about traditional song, and maybe there’s also a knock on effect from having told so many stories to the kids over the past few years.

Often, these stories require unique voices, and for these Lakeman and Roberts were able to call on their extensive network of friends, collaborators and family members:

SL: There was one song where we wanted a really sort of –

KR: It was definitely a case of choosing the right voice for the right song…and we’re very fortunate that we’ve worked with a lot of great people.

Although they may be able to delegate roles in their music, both Roberts and Lakeman fulfill a number of roles in their everyday lives.  For Lakeman, particularly, it can’t always be easy juggling fatherhood with production and performance, not to mention time spent playing and touring with his younger brother?

SL: It’s the merry-go-round… you’re on stage for six months and then I find I’m desperate to be in the studio making and recording music, and after a few months in the studio I’m desperate to be on the road again! A lot of the skills I learn on the stage I bring to the studio and vica versa – I find it quite liberating really, being able to jump between stage and studio. The one thing that is frustrating for me is that I get a lot more studio offers than I’m able to take on. I end up turning stuff down which is necessity really. I don’t want to live my life in a recording studio turning vampire white!

For Roberts, her primary role for several years has been that of parent, but she’s clear that this has only improved her music-making capabilities. She sounds happy and self-assured, musing how, with age, a person becomes more comfortable in their own skin and describing how motherhood has given her a better understanding of herself and her own capabilities. Lakeman, too, feels the positive effects of such a protracted break from intensive song writing:

SL: A break like that gives you the opportunity to immerse yourself in all sorts of different things without having to pull them into your art…Kathryn and I as a duo, we’ve been lucky to have that break, we’ve been able to reinvent ourselves and put something quite ambitious out without the expectation really.” 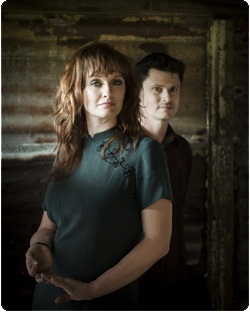 Hidden People certainly is an ambitious project for a couple more accustomed to putting out recordings as ‘a vehicle to play folk clubs’. It also exceeds previous releases in its production and conception, and is the first to be released on a big commercial basis. Lakeman sounds pleased and slightly surprised as he says, ‘We’re working with Navigator records and we’re suddenly on I-tunes and everywhere and getting reviews…We’ve never striven for that before.’

SL: We’re touring the album in November and confirming our line-up with one or two extra musicians, and hopefully by next summer we’ll be able to recreate the sounds more accurately. We’d like to put more musicians around us and make a fuller sound…

With such a love of traditional folk, not to mention an extensive back catalogue, FFS wondered if it was still possible for them to be influenced by new artists?

KR: Yeah! I’m quite a one for going back and listening to older stuff, but quite recently we were introduced to a band called Katzenjammer who just really caught my imagination. They’re an all- female band, multi-instrumentalists, they can all sing and are full of energy. It’s a world away from the kind of thing I sing, but I love it, I love the fact that it’s so different from what we do, it’s quite inspirational. I don’t think you’ll hear any direct influence on what we do next, but they’re top favourites in our house at the moment!

With this kind of link in, we couldn’t help asking whether their children, who must have some of the most pedigree folk genes in the world, have shown any signs of following in mum and dad’s footsteps?

KR: Yes! They have been coming to a few festivals with us and we have caught them at home putting on shows for each other. They’ve both got pretty decent voices.

SL: They’re more keen on Buddy Holly at the moment! They’ve definitely got a musical gene. We’re not at all pushing them towards anything – it’s good to see, but kids should be kids and if they want to explore that’s fine by us.

Pragmatic as ever, it will nevertheless be interesting to see if the Lakeman/Roberts dynasty continues  for another generation. For now, however, we’re pretty excited to see this incredibly likeable, phenomenally talented pair finally step into the spotlight. It feels like time.