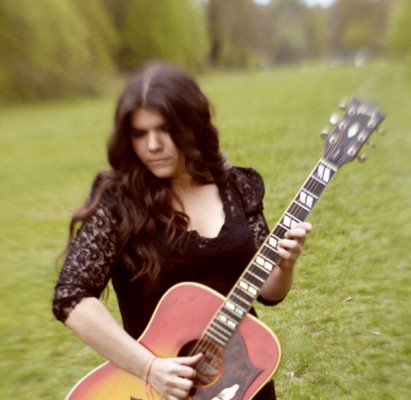 My first encounter with Michele Stodart was at London’s Apple Cart Festival in 2011. Brandishing a steel string guitar which she performed her stunning renditions of love, loss and wise experience: she takes you to a place which could just as easily be a dusty highway somewhere deep in the wild west. To say that Michelle’s songs are “rich” is rather an understatement; more that it has become the norm for the majority of people at her gigs to leave either speechless, or (and more often the case) crying.

On a late afternoon in a sunny garden, located in the pocket of North London, I was lucky enough to meet Michele in person prior to her gig later that night at the Boogaloo. We sat on a bench under the lingering rays of what was left of the sun, and talked and laughed about pretty much everything music-related.

Born in Trinidad, and living in Queens NY before settling in London, I ask her from what age she actually began playing music. “Music has surrounded me from when I can remember. It was when I got to London though that I started playing guitar, among others….I suppose I’d been storing it all up until then, when I began writing”. However, it was when her brother Romeo asked her for some emergency bass-playing skills every now and again for his own band “The Magic Numbers” that Michele regularly began to play live. “We had a studio at home and his band came round to practice. I started playing bass and fell in love with it”. Together, the band toured the world and made a staggering three records. At this, Michele’s face lit up, and she describes the experience as “beyond amazing”. Michele still works with The Magic Numbers, but at the moment she says they’re “doing a lot more writing for the next record and less touring at the moment, which allows me to do more of my solo work”.

Michele’s solo music is truly breathtaking, and it made me wonder where she derives such strong influences from, which constantly reoccur in her music. “I think everything that a person listens to will influence what they write as an artist. I’m a huge Joni Mitchell fan, and of course Patsy Cline, it was when I first heard Patsy Cline sing that I knew I wanted to sing. It’s a huge country influence I guess”. You can hear this throughout Stodart’s tracks; she has a beautiful country resonance that lingers through her lyrics. Towards the end of 2011, Michele supported Villager’s on the tour across the country of their debut album ‘Becoming a Jackal’. “It’s quite funny actually. Connor came around the world with us when used to be in a band that supported The Magic Numbers. That band split, and the Villagers formed. They’re a great band a very nice guys, it was sweet to go on the road and support them.” From moving to a solo career to supporting Villagers in such a short time, I asked Michele how daunting that must have been; touring the world and playing in huge venues, yet being for the first time on your own. “It was the first tour doing my solo stuff, it was really exciting, we went all over the world and never had anything planned, but always sort of went with the flow I suppose. We played in a lot of churches which I’d never experienced, and Shepherd’s Bush Empire was great.”

Michele’s actual tracks have an undeniably special quality about them. They’re raw in terms of emotion, simplistic with her accompaniment of acoustic guitar, yet have an everlasting sense of something deeper and possibly darker about them. We talked about how she goes about writing a song: “I don’t think it’s good to write your heart on your sleeve completely, but for me, i’ll sit with a guitar one night when I want to get something off my chest. I guess I write more ‘for’ and ‘to’ the song than anything else. It’s if something really hit me: that’s the only way i’d ever be able to write. I’m always writing something, any little thing I see or hear I’ll write down on my phone or in a notebook or something, and it all kind of pieces together. My songs always seem to stem from what I experience.”

Michele’s first single from her forthcoming debut album “The Wide Eyed Crossing”, is “Take Your Loving Back”. A song founded on subtle acoustic guitar, containing splashes of accordion and Xylophone amongst Stodart’s lofty vocals: a personal favourite of mine. It draws from a theme of mutual unrequited love between two people, and upon listening I could detect a feeling of possible resentment between these characters. “We chose that song as our single mainly because it was one of the first that appeared on the album. None of the guys that I tour with are the guys I recorded the album with, but it’s so nice being able to get a whole bunch of people together and just get up and go”. The rest of the album was recorded in The Magic Numbers’ studio in North London, and she says “the album will be released April sometime. We pushed the date back a bit, but that just gave us some more time to get things sorted.”

I mention the upcoming tour dates that Michele has planned for the remainder of the year, and we began to talk about playing gigs and the experience it brings. “I love playing live. I love being able to start all over again with my solo stuff, to support bands, to get the smaller venues too. It makes me feel like I was doing it ten years ago which is great, and the crowds are so much more intimate which really improves the atmosphere I think.” I know that some artists tend to take a preference between recording in a studio and playing live, but Michele describes them as “two totally different worlds”. To me, it seems an accurate description: “In the studio, it’s more getting the delivery right and getting it the way you hear it in your head, whereas playing live is more a performance- you take it as it comes. We did the album very spontaneously, we added instruments when we felt the track needed it. It gave it a fresher feel I think, and the songs just evolved as we played them more”.

Above all this, I wondered what else Michele possibly had time to do or enjoy, other than music. “Hmmm, I dunno really, it’s pretty much music all the way. Being a mum takes up a bit of time, and I love taking pictures and drawing as much as I can too”.

By this time our drinks were merely empty glasses, and the sun had finally bid us farewell for the day, so we rounded things up from there. It was a huge pleasure to talk to Michele, and she strikes me as not only (and obviously) an extremely talented musician, but as a funny and very interesting person in her own right. Along with her filling the slot for Slow Club’s support act later in the year, Michele’s debut album “Wide Eyed Crossing” will be available soon: hard copies will be available as well as iTunes + Amazon, etc. Here is a small taster of the album: her debut single “Take Your Loving Back”, recorded via Crypt Sessions.