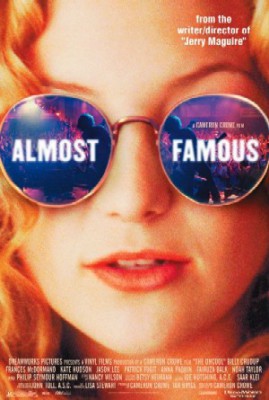 I want to write, and I want to write about music. There are, in my mind, only two types of people in this world: those who are musically talented, and those who aren’t. It’s those who aren’t that tend to go into music writing. That’s certainly why I’m here. You can throw any instrument you like at me, and I will prove myself adept at not playing all of them. Throw me a pencil, I might come up with something. Throw me a saxophone and you’ll get a talentless squelchy wail.

And so, I write about music. It’s the only option, really. Everyone needs to express themselves, about life, and love, and the things that excite them; if I can’t do this in song, like Disney always told me I should, then writing will have to do. And nothing excites me more than music.

It’s a similar motivation that leads William Miller, the protagonist in Almost Famous, to write. He starts writing for underground music magazines – small affairs that nobody really reads – but keeps pushing forward. Eventually he has a chance to meet his hero, a successful journalist from his home-town (Philip Seymour Hoffman), who acts as a mentor to the young writer. After some trial-and-error experiences, the fifteen year-old Miller is given a chance by Rolling Stone, who are unaware of his age, to interview rock band Stillwater. When William gets pulled into their nationwide tour, he finds himself experiencing a different sort of life from his repressed home existence, and risks losing his journalistic balance as he starts to befriend the band.

Almost Famous is not so much a film about music as it is a film about music-writing, and the motivations critics and journalists have behind their words. Cameron Crowe both wrote and directed the film, basing it loosely on his own experiences as a young music writer in the Seventies, and as such he touches on every aspect of our wishes, dreams and insecurities. We write about music out of a love and passion for it that, more often than not, we feel is simply too important not to be written down. It is arrogant, yes, but we are the musicians without the music, and we share many of the same influences and aspirations, only without the means to express ourselves through sound.

But Crowe also understands that a music writer, more often than not, just wants to be with the musician. Not, perhaps, in some sort of obsessive admiration (though there is, of course, always some awe at said musician’s ability to pick up inanimate objects and produce sounds more soulful than a human alone can create), nor simply in order to pick up some level of credibility-by-association (though, again, there must be a certain amount of that, or we wouldn’t always eagerly tell everyone else the famous people we have met). No, we journalists, more often than not, want to be around musicians simply so that we can be accepted by them, and be their friends, and in doing so, be equals with them. It’s sad, and it’s selfish, but it’s terribly, terribly true, and so many writers spend their lives shadowing the bands they love simply to feel they are, in the most brutal of terms, as good as the people they admire.

The worst thing, of course, is that, as our parents always tried to teach us, nobody is inherently better than anyone else. In fact, it is only when we devote ourselves to the idea of being accepted that we create the myth that we are not. And, of course, we lie to ourselves and believe that it is better to be a musician, and that if we were musicians, none of this would matter. All bollocks, of course. One musician will envy the song-writing ability of another, who in turn might envy the voice of another, who in turn may envy another’s skills with, say, a keytar, who in turn… well, you get the idea.

Maybe this isn’t it. In fact, it almost certainly isn’t – Almost Famous is, on the face of it, a film about meeting your heroes, or about loyalty, or about ‘bros before hos’, or, maybe, at a push, simply a film about a young rock journalist taken for the ride of his life by a fictional seventies rock group. But watching it as someone who writes about music, I was always going to see more than that – I was always going to see the selfish and disappointing motivations of music journalism, because I am guilty of them too. Of course we write about music because we love it – of course we do. But there’s more to it than that. At least, there is for me.