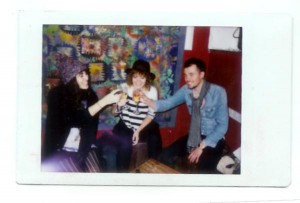 Peggy Sue will be playing the Park Stage

There are three types of Glastonbury punters. The first is the group who get frustrated if all three Pyramid Stage headliners do not live up to expectations. These are the people who didn’t buy tickets in 2008 because it was announced that Jay-Z was to appear.  The second group are those who realise there are approximately a dozen stages at Glastonbury, and that as a result there will always be someone you want to see playing somewhere on the site. The third group are the ones who go for the experience first and the music second. They understand that Glastonbury is a thriving world of its own – a tented city that, for one week in late June, houses a population larger than that of Sunderland.

The first of these types will always be disappointed – unlike almost every other festival, which each target a specific demographic, Glastonbury aims towards diversity.  The very nature of the festival means that you will most likely not be spending every night at the Pyramid Stage.  The second group and third group, however, are never disappointed. Those who go for the experience will always find it – on my last visit I witnessed a tranny teaching a seven year-old how to weld. Those who go for the wide-ranging music can always count on hundreds of different artists not to let them down. Last night’s line-up release has offered each of these groups a reason to be cheerful, though. And us folkies are not excluded from the mix.

Glastonbury’s fortieth year has provided possibly the best line-up that the festival has yet managed.  The headline acts alone are an impressive mix – regardless of your views on U2 (outdated, irrelevant, pompous, too many silly names) there is no argument that they are anything less than the most successful rock band in the world today.  Muse are, supposedly, the greatest live band currently knocking about the place. And of course Stevie Wonder is, well, Stevie Wonder.

Eleswhere, though, it’s both the Park and Avalon Stages that prove worth a visit for folk fans – the former will offer over the course of the weekend sets from Midlake, Laura Marling, Beach House, Peggy Sue and Fionn Regan. The latter offers The Leisure Society, Loudon Wainwright III and Richard Thompson.  On top of this, we can expect to stumble across sets by Grizzly Bear, Mumford & Sons, Devendra Banhart, Tunng, The Unthanks and N-Dubz. Though I may or may not be skipping the last of those.

As ever the main problem for a Glastonbury punter will not be who to see when nobody good is playing, it will be who to see when everybody playing is brilliant.  Saturday night will be particularly painful for me – Midlake headline The Park and Pet Shop Boys top the Other Stage’s bill. And yet I’ll be skipping out on both of these artists – each masters of their very different genres – in order to see George Clinton with Parliament and Funkadelic on the new West Holts Stage. Glastonbury is the only place where having a varied musical taste can become a burden.

And so I offer perhaps the only piece of advice I’ve ever had of any worth – if you are lucky enough to be joining me at Glastonbury this year, consider it as a world separate from the rest of live music.  Remember that artists treat this festival differently from any other on the planet.  This is the festival at which Lily Allen reunited The Specials live on stage, where Lightspeed Champion played live with We Are Scientists and where Jonathan Ross’ 4 Poofs and a Piano play on about eight different occasions each year. So my advice is this – do not choose who you see based purely on how much you want to see them – most of these artists have many years of touring left in them yet; the chance will rise another time.  Base your choices on how likely you are to see anything like it ever again – on those who might bring on a special guest, do a once-in-a-lifetime cover, or play an entire album in full (it seems likely that Flaming Lips’ appearance this year will see them play through Pink Floyd’s Dark Side of the Moon, which they are set to release for Saturday’s Record Store Day). In the end, it’s the third group of punters who have it right – Glastonbury is about the experience. And as long as you recognise that the music is every bit as important to the experience as the welding transsexuals are, you’ll have the time of your life.

1 comment for “Folked Up: Stephen Thomas on the line-up for Glastonbury 2010”