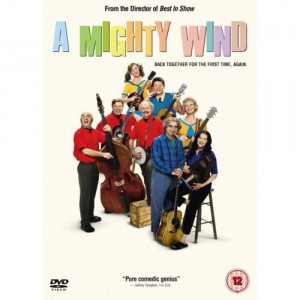 Folk fans are a lovely group of people. I don’t have to tell you that – you are one, and you’re probably well aware that yes, you are indeed a lovely person.  But for all our loveliness, we’ve certainly built up a terrible selection of clichéd stereotypes for ourselves.  When I was younger I avoided folk music altogether, associating it with fat bearded men in home-knitted jumpers and corduroy trousers.  My father, to this day, still associates the genre with cheesy harmonies and naïve grins. My mother sums it up as ‘hillbilly music’, whether it be Mumford & Sons or Sufjan Stevens, simply as a result of banjo-use. And, above all, the general stereotype is that folk music is a genre that takes itself a little too seriously.

A Mighty Wind acts, in some ways, as a spoof of these stereotypes.  A mockumentary following three fictional folk acts as they prepare for a tribute concert to their mutual manager, it takes its musical cues from bluegrass influences and, via the duo Mitch & Mickey, the folk sound synonymous with the mid-sixties – that of Joan Baez and her contemporaries.  From the director of This Is Spinal Tap (and re-uniting the actors that played the titular band in the form of another group, The Folksmen), A Mighty Wind is essentially the folk genre equivalent.

The film’s main satirical focus falls on an older era of folk music – where matching uniforms were commonplace and the aspirations were naïve and airy. The problem is, though, that no matter how earnest these artists were, their music and lifestyles were not nearly as silly as those of the heavy metal bands satirised by This Is Spinal Tap.  As a result, the film itself lacks much of the punch that director Christopher Guest’s best known film has.  In Spinal Tap one can find moments that have transcended the traditional boundaries for pop culture references – the BBC iPlayer, for instance, has a volume bar that literally goes up to eleven.  A Mighty Wind, unfortunately, is a film made almost entirely out of forgettable moments. The only memorable aspect is Eugene Levy’s surprising and inspired performance as Mitch Cohen – one half of a husband and wife folk duo who have not spoken since the traumatic break-up that ended their career together several decades earlier. Now drug-addled and at times hard to understand, Cohen works better as a pastiche of musicians like Ozzy Osbourne than he does any of the folk musicians he is perhaps supposed to be a tribute to.

By making a film centred around the pomposity of folk music, it could be that Guest aimed to poke gentle fun at a genre he loved and, in doing so, shake it free of the shackles of stereotypes that have bound it for too long.  The problem is that most of the funnier moments are saved for Levy’s rambling shadow of Ozzy Osbourne, and the picture of folk that Guest focuses on is that of a genre that died out some twenty to thirty years ago.  Nowadays folk is vibrant and contemporary.  More often than not, it’s even fun and a little bit sweary, rather than the family-friendly sing-a-longs spoofed by A Mighty Wind.  In the end, though, the film’s failed not for any of these reasons, but simply for this: it has resulted in this writer taking a couple of hours out of his day to stodgily write up an overly-analytical and serious piece about a comedy film that aimed to make fun out of just the sort of people that he is.  Maybe that’s why I could never enjoy this film as much as I’d like to – I see too much of myself in the characters it mocks.

4 comments for “The Folk Music Film Club: A Mighty Wind”