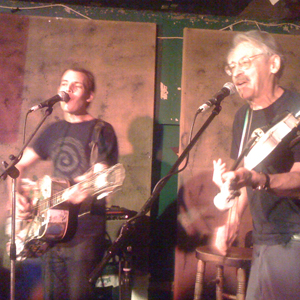 Frankly, by now we should be used to Jeffrey Lewis’ musical left turns. After albums of Crass covers, multimedia sing-songs about the rise of communism and just about the most disparate set of song subjects across a career (falling asleep on a Greyhound bus or being raped by Bonnie ‘Prince’ Billy for example) it should come as no surprise to find that his newest album is a collaboration with 72 year-old Peter Stampfel, ‘60s psych-folk legend and all-round weird man. In fact, this album proves that this strange meeting of minds and talents is about the most coherent decision Lewis has made thus far – these two are kindred spirits through and through.

Lewis brings his usual mix of lilting anti-folkery and, shall we say, “imaginative” lyrical output whilst Stampfel brings a more traditional sound, full of free-wheeling violin and a voice that can only be likened to the upper reaches of an Adam Buxton late-period Bob Dylan impression. The result of this collision is an album that careers along on a tide of its own sense of fun – from the opening hoedown of the title track onwards, you never lose the sense that this is music made solely because of the friendship between the two performing it.

It’s this dual input, and the sheer relish of the other to let the other do their thing that makes Come On Board the joy it is. ‘I Spent The Night In The Wax Museum’ is classic Lewis, all creepy lyrics and a sense of story that makes it an engaging listen, but backed up by Stampfel’s trembling violin work and it becomes a far more shadowy affair – it’s an addition that might never  have been made without his involvement. Equally, ‘Bottlecaps Are Cool’, Stampfel’s ode to his favourite hobby, is given the kind of laid-back feel that permeates much of Lewis’ material, giving it the sound of a much, much younger man’s enjoyment and lends a brilliantly smile-inducing side to what could have been a far more straightforward song.

There are darker moments of course – ‘Little Sister In The Sky’ sees Stampfel let out a particularly heart-rending performance of love and loss – and these are just as ably aided by each of the duo, adding the perfect weight of emotion needed. The purest evidence of just how well-handled this album has been is that once it reaches the final track, to all intents and purposes a ten and half minute, stream-of-consciousness experiment in prolonged rhyme that it never seems over-indulgent – this is just Lewis and Stampfel having more fun.

This commitment to enjoyment means that Come On Board becomes not just a set of excellent (anti-)folk songs, but a series of wonderful moments. Hearing Lewis inadvertently chuckle at Stampfel’s over-exuberant background vocals on ’20,000 Leagues Under The Sea’, the back-and-forth exchanges on ‘He’s Been Everywhere’ or hearing Stampfel exclaim his love over and over in the aptly-titled ‘Love Love Love Love’ are the kinds of things that stick in the mind and make you want to listen to them again and again. The upshot of all this is that Come On Board isn’t just the most fun an album’s offered this year, but it’s simply one of the best listening experiences of the year so far.

← Album: Roddy Woomble: The Impossible Song & Other Songs
Album: Joan as a Policewoman – The Deep Field →

3 comments for “Album: Peter Stampfel and Jeffrey Lewis – Come On Board”