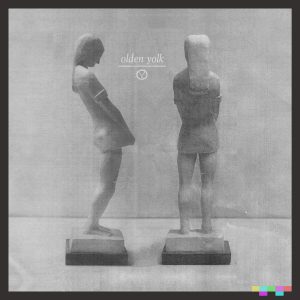 Admittedly, psychedelic folk isn’t considered the coolest genre in music, nowadays. That’s OK in itself, but in this case the lack of coolness reflects the way that contemporary bands have engaged with the genre; briefly, in a monolithic or static way, and sometimes even in a caricatural way (think about the druidic imagery of Midlake’s “The Courage of Others”). But overall, it feels like little has been done to renew and personalise the psych-folk style.

By way of the new-psychedelia movement, it comes down to Quilt member Shane Butler and to Caity Shaffer, along with jazz/hip hop drummer Dan Drohan and guitarist Jesse DeFrancesco, to plant a marker with this project named Olden Yolk. It is a project born in New York, so in a scene where new-psychedelia and its integration with Americana elements is not unknown (Woods, Quilt of course, etc.).

Melodies and tunes are evasive, in this album, but one perceives an inner strength to the songs, a vitality that originates from intelligence and care. This is true for uptempo new-psych numbers like ‘Cut to the Quick’ and for slow-burners like Kevin Morby-inspired ‘Gamblers on a Dime’.

The genre crossover is pervasive and contributes to the freshness of the record, as with the proggy indie-pop of ‘Vital Sign’, not to mention with brit-pop in the best track of Olden Yolk, ‘Esprit de corps’. At the same time, there is an attention to psych-folk original style: male-female vocal duets, multiple fingerpicking tracks, obsessive rhythms, distortion effects. And there are strictly psych-folk songs as well, of course, each with its own tinge though (folk-rocky ‘Takes One to Know One’, synth-dreamy ‘After Us’).

This is an album to delve in, as no obvious spikes emerge, but nuances abound. It is one of those rare albums that rewards commitment and discernment, and also sounds a lot like a full-grown band, rather than a one-shot collaboration.