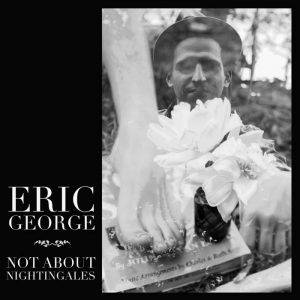 Eric George is one of the smartest songwriters in the entire indie folk scene and nobody knows it. That isn’t to say that nobody knows him—or, at least by this point he should have the entire state of Vermont on his side—but he wraps his way around the intricacies of his arrangements so deftly that one wouldn’t be mistaken, from a laymen’s perspective, to call his work ‘simple’. Yet, to call it simple and leave it at that would deny the work that George has secretly laid out in his best-planned way to keep listens deceptively casual for his listeners if they so choose to ingest his art in that style.

Not About Nightingales is an album of folk music with no frills—or, rather, not the frills that modern folksters would be used to. Rather than taking on the full-on genre-bending antics of a band like the Accidentals or Grizzly Bear, or making everything a rousing four or five-note party this side of Mumford & Sons, Eric George is an unabashed bard of the contemporary persuasion. He is the sort that you would expect to sit down with a guitar in the back of a smoky room, play his set, and be done with it ala Dylan. One wouldn’t be wrong to call his music back to such greats, especially considering his own association with Bob as one of his primary influences.

Not unlike Dylan, either, is George’s uncanny ability to make a song sound simple when it’s in fact rather ingeniously devised. While he has an assortment of instruments beyond his guitar at his disposal ranging from bass, to drums, harmonica and strings, production keeps his vocals and his strumming front-and-center. This is smart because it’s where the majority of the action is happening with all of the various techniques involving schema that he incorporates into his music to keep listeners captivated despite a naked overall delivery.

Whether he’s engaging in ebb-and-flow shifts in pace or a sort of call-and-shout delivery akin to the likes of “Don’t Think Twice, It’s Alright”, he is showing that there’s a lot more than meets first listen with his work. He is an incredibly smart, adept songwriter who writes from a place both cerebral and heartfelt. Perhaps, the less you know that, the better. It means he’s doing his job to come across as the empathetic storyteller that he is.