Wilco, despite being 10 albums into their career, are still a band to hang your hopes on. They’re not your 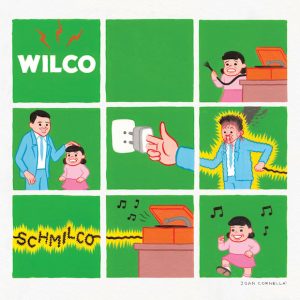 typical band, most don’t make it this far, and the band’s past clearly reflects why these 6 guys still exist doing what they do.

Schmilco is weird, because it’s rather quiet for Wilco. In fact, if you thought you could define Wilco by some noisy guitars and contemplative tracks mixed in amid the noise then this album will come as a fan’s biggest challenge yet, potentially. It feels a bit more like a Jeff Tweedy solo record, so pared down it is. That isn’t to say the supporting instrumentation of the other 5 men isn’t beautiful and sensitive to the tracks, but it’s just too quiet. It’s summery, it’s lovely for the most part and it’s clearly still Wilco, but by halfway you are screaming out for some noisier guitars. Let’s face it, Nels Cline is one of the planet’s finest lead guitarists and to not hear him rock out at all can only ever feel like a missed opportunity.

Once the surprise factor of how low key this record is it gives the chance to get into it. Only then can you start to appreciate the record that has actually been made. And it has to be said, it’s another fine record indeed. Elephant in the room… Wilco is unlikely to match the sheer majesty and Beatles-esque brilliance and melodies of Yankee Hotel Foxtrot and A Ghost Is Born when the band was obviously at its peak, but it’s a justified continued existence. There are moments of absolute magnificence here. ‘Common Sense’ might be the most original and straight up weird thing the band has ever done. It’s a cracker for oddlings, as it doodles inside your ears.

After a couple of listens the album becomes clear as a wonderful vision that early reviews are capable, likely even of missing. There’s a slow groove on some of the tracks, like there is a rocking soul even if the tracks never truly go ape as some of their past ones have. Last year’s Star Wars offers one side of Wilco and this another entirely. As they come from the same sessions it’s testament to the band that it can be so thoroughly split into what sounds a little like two different groups.

Wilco is no longer hoping to stumble across something akin to its former glories and has turned itself to focussing on treading new ground, and embarking on its own fun sonic journey. As it happens the band’s 2 albums in as many years prove that not only are they still relevant but can test both themselves and their listeners. What more could you really ask for? It isn’t easy to move past a period of making total classics, but here stands Wilco, still making music both inspiring and intelligently profound. Get past the quietness of this and you are in for a treat.