The fertile Hudson River Valley in upstate New York is home to Woodstock, the Saugerties, and Columbia 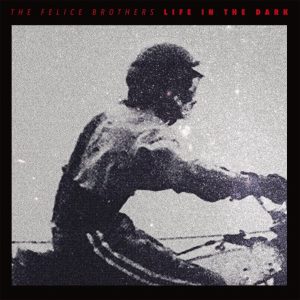 County where The Felice Brothers recorded Life In The Dark on their family farm. Using a do-it-yourself ethic they created a studio in their garage and recorded everything themselves. There was no thought to actually recording an album, but when they listened to the results they were sold.

Since the 2009 departure of Simone Felice to a solo career and playing in The Duke and The King, the band has carried on with brother Ian handling guitar and vocals and James Felice on accordion, keyboards and vocals. Greg Farley on fiddle and Josh Rawson on drums round out the core band.

Clearly there’s something in the water of the Hudson, echoes of The Band exist everywhere, beginning with album opener, ‘Aerosol Ball’. Fiddle and accordion take the lead. Lyrically what sounds like nonsense, “The rain in Maine is made of Novocain/In the Florida Keys it’s made of anti-freeze/In Maryland it’s made of heroin/In Minnesota it’s made of baking soda,” begins making sense. By the track’s end there’s a clear condemnation of the impact corporate America has had on society.

The indictments continue on ‘Jack At The Asylum’. Over a base of fiddle and acoustic guitar the song recounts a life of American opposites coming to a final conclusion, “You killed your son Joe Hill/The nightmare, she read me his final will/I thought of running off but where would I go/I wouldn’t make it beyond Buffalo.” It’s a pretty grim picture, but the music undercuts the song to leaven the heavy load.

‘Life In The Dark’ is a more personal tune built on a mournful fiddle. A pretty descending piano riff creates a gentle acceptance, “It’s all in the blink of an eye/We laugh and we cry/We fall in love and we die/We don’t know when, we don’t know why.” ‘Plunder’ rocks out on an Al Kooper-ish organ riff, yet there’s still enough craziness to go around, “They say that only 80 men own more than half the world/I had a dream they spread it around/I ended up in the mental ward.”

An out and out fiddle tune, Sally, serves as a palate–cleaner before the final three tunes. The Felice Brothers’ ‘Diamond Bell’ is the sort of tale Dylan does so well, this one revolving around Diamond Bell’s “Kansas killing spree.” Recounting a meeting of two old friends, ‘Dancing On The Wing’ asks questions although the singer already seems to know the answers, “Are you dancing on the wing?/Are you singing Carole King?/Are you starting some thing big, again/on a plane to California?”

The DIY aesthetic of Life In The Dark serves The Felice Brothers incredibly well. While the songs are clearly rooted in the present day, the music has an ageless quality, a sense of tradition not necessarily found in the city. There’s a sense of time, place, and pride in the traditions of great American roots music. Thanks to The Felice Brothers the roots run deep and the music runs pure.