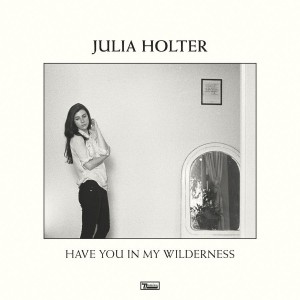 Look no further, Julia Holter is in pole position for artist of the decade. Early promise has not only been realised but even surpassed on this her fourth album. Following on from 2013’s Loud City Song, this is her second masterpiece in the space of three years. It has a brightness lacking from its predecessor while losing none of her panache and elegance. Holter is a unique musician and composer who seems to have a wildness that few can match.

She is faithful to her spectacular vision and now seems to be able to realise that fully in all its sonic glory. The darkness of her sublime last record has been replaced with something more hopeful – and in places explosively upbeat and quirky – while losing none of what made it so special.

Have You In My Wilderness is one of those albums that deserves to be taken care of. It works its way inside, quickly, for something so strange, somehow almost familiar, and then never leaves. You think about the songs, the whole thing as one unit, beyond the experience of listening to it. You contemplate how extremely poetic – in every sense – the songs are, and how it enhances life in such heart-warming fashion. Somehow she sculpts singalong moments out of songs that seem anything but pop.

Her 2012 release Ekstasis was the start of something special, yet only a year later on Loud City Song she seemed to invent a musical playground all of her own, the kind of feat achieved by Björk, Pink Floyd and Sigur Ros among few others, the real special artists, before her. It’s music that is largely beyond definition, beyond genre labels. Yes, you might associate baroque pop or avant garde or electronic labels with her music, but it encapsulates the very best of all those and much more. No couple of words can do her musical universe justice.

There are too many magical moments to mention, it’s almost so special it hurts. Pushed you could single out special moments, ones that give goosebumps, across all ten songs. Each song feels likes an expedition to some far reaching place, from which nobody or nothing will ever be the same again. It’s life changing music that quite frankly is no easier to believe after multiple listens. If you know the singles that preceded the album then you’ve been shown the doorway of light that surely would only tempt anybody closer, but nothing can prepare you for the wonder of ‘Betsy On The Roof’ and somehow tragi-­hopeful adult ballad ‘Night Song.’ It’s utterly mesmerising.

This is music from another planet. This is probably Holter at her very peak, at 30 years of age, as it’s almost unfathomable to think she could improve from this point, though that remains to be seen. Savour this, for it truly is a masterpiece, from start to finish, possibly the album of the decade, and perhaps, just perhaps, only this lady herself could beat that.