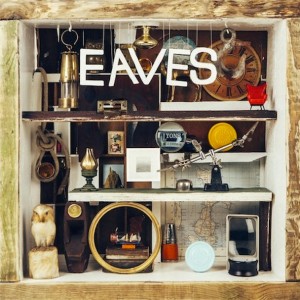 The hushed, twinkling guitar intro of ‘Pylons’ sets the scene for a beautiful collection of songs on Eaves’ debut album, What Green Feels Like. The song’s mysterious indie-folk sound roars into a more ferocious second half, ablaze with bass and drums and soaring chorus vocals, capturing perfectly the essence of the record.

While the song itself is the stand-out track, and indeed one of my favourites of 2015 so far, the rest of What Green Feels Like is equally refreshing, drawing on an eclectic mix of styles, reminding me simultaneously of the progressive metal of Porcupine Tree, the slightly magical folk style of Genesis’ Nursery Cryme, and the grunge of Soundgarden and Alice in Chains. ‘Spin’, the album’s gorgeously layered second track, could fit snugly into Radiohead’s Hail to the Thief, as its sweeps through its various sections, defiant and powerful.

After two such brooding songs, the gentler ‘Spin’ provides a sweeter edge, with picked acoustic guitar and soft harmonies. ‘As Old As the Grave’, which incidentally appears to start with one of the motifs that appears throughout Ravel’s ‘Piano Concerto in G Major’ (I saw an amazing performance of it by my friend Johan at the Royal Academy of Music this week…), shows off more of the folk influence, all the while couched in Eaves’ meatier production. His proficiency with a piano shines on tracks such as ‘Timber’ and ‘Hom-A-Gum’, providing another dimension; the brass and piano section in the latter provides one of the album’s numerous emotional highlights.

It is a stunning album – it not only vindicates Eaves’ swift rise to mainstream success, but also reveals his rich talent and musical influences, as he has managed to create something that is both affecting and unexpected.