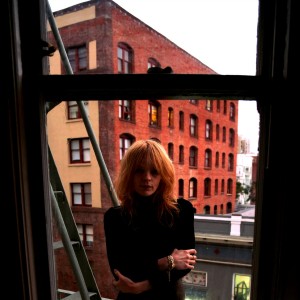 Jessica Pratt has created her own strange folk wonderland on her second record. With shades of Nick Drake, and gloomy beguiling spells, there is a sound and songs here to cement the creator’s reputation as a dark folk goddess. It’s an open and vulnerable record, just as the cover seems to show Pratt’s down to earth existence, the songs also seem personal and fragile glimpses of the lady that made them. The sound of the tape rolling at the start of some tracks is both nostalgic and indicative of her awareness of both the old and new.

After listening to the first few songs you start to feel swallowed by the world she is conjuring. It has an effect that is not to be underestimated. There may only be nine songs, and it may all only last a shade over half an hour, as seems to be becoming more and more typical for the modern album, but it has an impact, made by the few instruments and the lady that wrote them, like a woman spinning a yarn that somehow reveals a great story. You certainly want to listen and hear it to its conclusion.

It sounds like it could have been made decades ago, whilst not having the faintest hint of being dated. ‘Back, Baby’, the penultimate track, would seem the definitive representation of all her strengths. It’s a stunning little lament which centres around not being able to go back in time and correct past mistakes, something perhaps everyone can relate to. If this is what an album is becoming -­ short, concise, compact and imaginative – then On Your Own Love Again is a wonderful representation of the evolving format. The artist has done herself proud, but also made the audience want more, and that can be no easy or small feat. It’s certainly fully understandable based on this to believe that someone might want more, which immediately creates the perfect platform to go out, tour the album on, and build anticipation for future releases. A great step forward for Jessica Pratt.