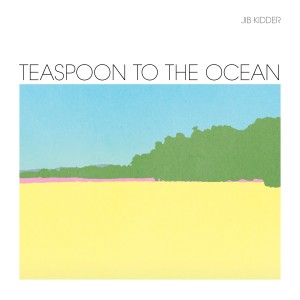 Jib Kidder is the pseudonym of Sean Schuster-Craig, a ‘pop collagist’ signed to Domino’s ‘Weird World’ label. A visual and video artist who describes his music as another form of collage, his playful, psychedelic sound lies somewhere between Dirty Projectors and The Flaming Lips.

Although it contains a flourish of instrumental parts obviously played by somebody, this album feels electronically finished. The sense that they could be spliced together in someone’s bedroom allows the songs to move away from the touchable world into escapist hinterlands. This distance also creates a kind of yearning. Teaspoon To The Ocean is meant to imitate dreams, and Schuster-Craig states (here) that ‘My gift as an artist is in seeing a connectivity between things that cannot be reduced to words’. That said, here’s my best shot:

The first song, ‘Remove a Tooth’, is twanging and frenetic, with a robotic voice that’s a bit grating at first, like Laurie Anderson but less intelligible, or like tonguing a tooth that needs to come out. Indistinct lyrics usually annoy me, but there are a few reasons why someone might sing this way:

1) The artist is shy of their words and hopes to hide them.
2) The words are another texture in the song’s surface (they’re not there to be ‘understood’).
3) They might be mimicking dreams, in which you try to say something but the words aren’t fully audible.

Anyway, there are some lovely ‘ahh-ing’ sounds from a second female voice, and Teaspoon to the Ocean is more fun when I stop trying to make out the words. The second song, ‘In Between’, feels like riding a rickety cart over a bouncy castle, with a slightly clearer voice, and a drunk rhythm that’s repeated at various points throughout the album.

‘Appetites‘ is a collaboration with Julia Holter, like a duet between two wistful computers. It’s sweet, with a lovely stringed riff.

Following this, ‘The Waves’ is like being stuck in a giant jelly. Not fun, but interesting in a queasy way. ‘Situations In Love’ is much more catchy, almost a rock song, with a languid, grungy attitude. It also reminds me of being underwater in a swimming pool.

I lose patience with the next song, ‘World of Madness’. Partly because of the title, which feels like bear-baiting (“I’m totally mad! I’m crazy!”), and partly because its kookiness feels expected by this point in the album. However, ‘Dozens’ is a release, an experimental surf song.

‘The Many’ is like floating through a park, and ends with the sound of rain, gently immersive. Following this fuzziness, ‘Illustration’ is a contrast, all syncopated drums and guitar; it’s mostly rhythm.

‘Melt Me’ is full of chimes and bells, and is quite beautiful. It does sound like a small sugar person being dissolved in warm liquid. ‘Wild Wind’ rounds off the record. The voice is more direct here, clean, and there’s a celebratory feeling, as if it’s a peace anthem. It’s strangely touching to hear a half-computerised voice singing to the wild wind.