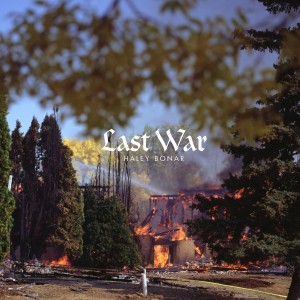 The almost Joy Division-esque opening to Haley Bonar’s Last War is odd. It soon settles you as Bonar’s pleasant but not life-altering voice breaks the uncertainty. The cover of this record is perhaps the most brutal part, and seems to show some kind of aftermath of battle or at least an incident, from which the singer has likely emerged to deliver these nine songs to us.

Those songs are rather charming, melodic, easy to like, there are some big guitars and tricks that demand attention. The ‘war’ of the title is an intriguing theme for the album. The opening track just doesn’t grab you. It’s odd that it was the lead single from the album. Second track ‘No Sensitive Man’ certainly kicks up more of a fuss and demands a more attentive ear. It tries to struggle free and run away in its short two and a half minutes. The opening track is almost a red herring, as it seems to be the weakest track on the album. Once the title track arrives, Haley has now not just come to life but began conducting her very own anti­-war storm. A final storm to eternally blow war out for ever, like some candle that for all too long damaged our race. The war could be love, heartbreak, but the emotion would remain the same toward it. As ‘Last War’ builds it feels like something you must have heard before, a sense of familiarity only achieved because it is brilliant. It’s a grower too, each time getting its claws deeper into you. The album had an obviously slow start but is now magnificently alive.

‘Heaven’s Made For Two’ is slower, moodier, and deliciously dark, enough to give a sense of unease whilst feeling intensely curious to dive further into the song. It’s end is like a fantasy slipping into an indie nightclub, dancing a drunken whirl and collapsing. The middle track showcases the talents of the extraordinary Justin Vernon (Bon Iver, Volcano Choir, etc.), a grand coup for Bonar, and is one of the brighter more melodic moments. It’s a sweet, lullaby of love, that has certain shades of The Beatles, somewhat surprisingly. Vernon, of course, adds to the song, delicately contributing his backing vocals as he often does, so knowingly.

‘Woke Up In My Future’ has a lovely driving energy, making it a great track for, erm, driving to. It can definitely be seen coming from the stereo of an open top-car as it cruises around, day or night. The opening loveliness of ‘Bad Reputation’ is even more sweet for the change to the tone the last track ended on. There’s a good mix here, and her tender and grandiose moments are well balanced. Some of the album is even majestic. ‘Can’t Believe Our Luck’ is brief, again displays a saccharine side until the dark almost-­chorus (it’s very short) in which she just gets her teeth stuck in the second time around before it sadly ends all too soon. It was ready to take off. That might be precisely the intention, but it’s hard not to be left wanting more of the track.

Then comes the final track of the 32 minute puzzle. Once more, Vernon aids Lady Bonar with backing vocals, even more subtle and so well conceived that despite such a fragile ending ‘Eat For Free’ is a wonderful way to end an album that packs a lot of moments that will certainly be worth revisiting. It isn’t going to change anybody’s world, but it’s certainly a well made album that if it reached the ears would make people happy. It’s not hard to see how she enlisted Mr Vernon and his touch of genius, she has something herself that is intriguing, highly listenable and an indication of what might follow, which could be very interesting indeed.

The war of which she speaks could be life or love or any given war, but the chances of there ever being a last one are endlessly hopeful and highly unlikely. The concept is a tricky albeit beautiful one. Perhaps it means the artist’s own personal ‘last’ war, the most recent one. Either way, it’s an interesting topic, as it actually surrounds us in one way or another in our earthly existence. Perhaps therein lies the appeal of this woman’s music.