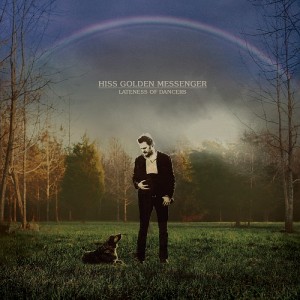 Hiss Golden Messenger’s latest record, the band’s fifth, is one of those records that does what the artist would hope – it encapsulates the act in a ten-song set, and at its peak, paints a beautiful scene on a canvas, before your eyes, that is hard to ignore. It’s a stunning statement, and one that might be hard to match for the act.

It’s mellow and yet fierce. ‘Day O Day (A Love So Free)’ innocently introduced by a small child in that move demonstrates some of the charm herein. It feels like being open and vulnerable, and whether you get hurt or not, listening to these songs, it’s about the being alive, being able to feel something that truly matters. Separately, if your heart is broken or hurting then these songs might ease the pain, accompany you through that journey, and make you feel less alone.

‘Lucia’ is the perfect gateway, with its near­Dylan lazy vocals and Sunday morning chilled out vibe. Then the title track halfway in is sparse and really seems to circle the audience and then just gently float around the head, pulling at the senses, like a master does the puppet whose strings he is pulling. It’s intoxicating, extremely subtle but hypnotic. It’s actually a tour de force of folk music, taking over the room and filling it up, until you practically feel like you are swimming through the song, inside it. The title track is THAT good.

‘I’m A Raven (Shake Children)”s groove explodes from the speakers, with a beautifully simple but effective bass and drum combination, with sumptuous guitar licks. The vibe once again is enough to bowl over anyone listening. The rich timbre of the vocals is almost bruising, and the clarity of lyrics is something that lends to how easily and instantly accessible the whole package is. It’s almost as if the songs were constructed with you, at his side, experiencing the life that inspired each track and its growth from an idea. Imagine looking in a mirror and this man appears and sings back at you, about love and life and all the hurt and joy. This is a powerful album, and it truly reaches out and touches.

This album is one that sounds instantly familiar, one of those that makes a constant and deliberate companion, never relenting in its spells and how they guide us through the days. It’s not hard at all to become lost in the songs and to consider it a compelling work. It does nothing new, but it’s so well done you cannot help but admire the contents. It’s a foot tapper, it’s a sing­along record, once you know the lyrics, and it’s a work that deserves an audience, both purchasing the album and going to see these songs performed live, which would doubtless be a further treat.