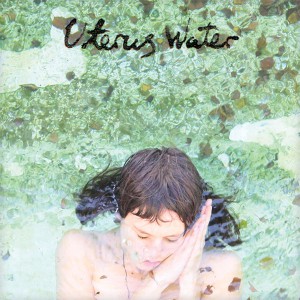 For a relatively unknown artist, Kría Brekkan’s creds are superb – a former member of whispery Icelandic collective múm, Kría has been slowly gaining a name for herself in the indie rock scene, including featuring in the cover art of Belle & Sebastian’s LP ‘Fold Your Hands Child, You Walk Like a Peasant’, dueting with Antony Hegarty of Antony and The Johnstons, and getting hitched to and making a oddly-compelling, reversed album with Animal Collective member Avey Tare (Pullhair Rubeye).
So for all her connections, how does Kría stand up as a solo artist? The obvious answer to that is that she doesn’t – on ‘Uterus Water’ (no sniggering at the back), Kríá more gently drifts her way through a selection of billowing, sinister noises – the sound of water flowing down a drain, rumbling echoes, the tops of glasses being rubbed, and what sounds like a heavily-mutated sound clip of howling winds, all set against a shape-shifting, punishing wall of impenetrable feedback. I’m sure it’s all meant to be very profound, but the more you listen to it, the more you realise any idiot with Garage band and a FX CD could probably have knocked up something to the same kind of effect.
‘Uterus Water’ is the antithesis of what a song should sound like – it has no structure, no lyrics, and nary a recognisable instrument – it’s almost entirely insubstantial. However, according to Kría, the creation of ‘Uterus Water’ came under desperate circumstances:
“Early this year I was sick for weeks coughing bad air out of my lungs
cause of all the smoke from the fire cumulating in the old electricity.
The waters of our insides had already dried up in the heat and would not
become of much use to bring the flames braking out down. That night
outside wind blew unruly. I was staying in an apartment of a friend who
was gone and had a song to make for children to go to sleep to. I
crawled onto the floor and created Uterus Water with the instruments i
found around me like shelter”
So 10/10 for poetics on Kría’s behalf, but ‘Uterus Water’ is less than the sum of its parts –on paper, ‘Uterus Water’ is a deeply affecting slice of experimental naturalism akin to The Album Leaf or Vespertine era Bjork, but it’s lack of structure renders it completely flimsy and entirely forgettable. But let’s not be too harsh on Kría – even ‘Subterranean Homesick Blues’ wouldn’t have sounded too hot if Dylan had been recovering from an illness and surrounded by small children whilst writing it.
Any hopes that ‘Uterus Water’ may become a little more buoyant as it progressed are quickly dashed with the next track – next to ‘Uterus Water’, ‘Place of You’ sounds like ‘Copacabana’ – well, at least it has instruments and some semblance of lyrics. It begins on Kría whispering over dull guitar chords and the sound of rushing wind – she sounds like a schoolgirl furtively whispering secrets in an empty classroom. Gradually, a sweetly juvenile piano line is introduced, and Kríá’s eerily lo-fi arrangements finally manage to take on some semblance of cohesiveness – the lingering, lone piano chord at the end of the track even manages to be genuinely affecting.
‘Ribbon Bow’ is an altogether different affair – although it’s name may suggest a twee slice of indie-pop, it’s Kría’s blackest and most experimental moment yet – and considering the rest of the EP is hardly ‘Pet Sounds’, this isn’t a superlative to be taken lightly!
It starts off with the same kind of decayed, choral mutations that graced Bjork’s ‘Medúlla’; Kría’s high, cloying croon is layered over a buzzing, nasal, masculine voice, creating a – if not particularly pleasant – interesting juxtaposition.
However, Kría’s production method in ‘Uterus Water’ still creates a mental block- a niggling doubt in the back of my mind that hinders me from fully enjoying this record. Perhaps it’s my relative ignorance about the production used in the ambient music, but I can’t help feeling that Kría’s malnourished, lo-fi style is simply a kind of ruse to quickly and (perhaps) inexpensively create releases with a credible, artsy air.
Having said that, there is something fundamentally compelling about Kríá’s flimsy constructions –the sense of impenetrable mystery and alienation surrounding her records appeals to something basic and primal inside of us – the same kind of technique is used by The Knife with their elaborate masks and austere stage presence. Kría Brekkan certainly has the willing attitude towards experimentalism to go far in her musical explorations, and I feel that if reels in and harnesses that creativity into a more traditional style, we could be seeing some very, very interesting things from Ms. Brekkan in the coming years.
Words: Katherine Rodgers

← Album: Sparrow and the Workshop – Into the Wild
EP: The Miserable Rich – Covers →