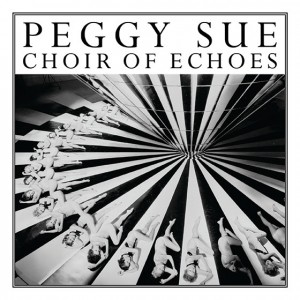 In the press release for Peggy Sue’s new record, Choir of Echoes, the band described it as “about singing, about losing your voice and finding it again. Choruses, Duets, Whispers and shouts.” True to their word, the first track, eponymously titled, is 90 seconds of “ooohs” in a call and response style, the echo of the human voice reverberating. It is an auspicious start to the record; a brave one, although the same can’t be said about what follows.

What stands out from this record is that I find myself coming back to it, time and time again, trying to discern the lyrics and immerse myself into the arrangements, the fuzz of guitars and the harmonies. Yet each time, I leave struggling to recall what I’ve heard. It isn’t through a lack of trying, but it is hard to connect with a record that offers so much but is often muddled in execution. The voices of Rosa Slade and Katy Young are light, and are a pleasure to listen to, but too often than not they are lost inside the proverbial wall of sound; production levels swamping the vocals in layers of guitars and drums. Occasionally, it blends together well, as in ‘Esme’, which recalls the delicate tones of Warpaint, the hushed arrangements and barely-there voices. However, unlike Warpaint, most songs tend to build up to a climax which never comes, leaving the listener frustrated and wanting more.

I don’t want to be too harsh on Choir of Echoes, as it does keep drawing me in. I’ve listened to it in the car, over the home speakers, on my headphones; in morning and at night, yet still it doesn’t connect. There is a lot to like about Peggy Sue, not least the subtlety of the lead singers, but their voices are often, like the Echoes they refer to, lost to the ether. A band with great intentions, just not the best execution.