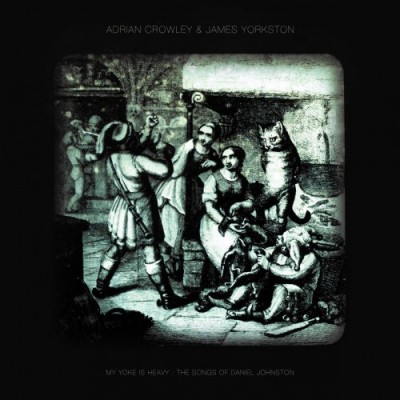 Adrian Crowley and James Yorkston are no strangers to the scene. The former’s album Season of the Sparks won the Choice Music Prize for Irish Album of the Year in 2009, while Yorkston’s relentless touring and recording has seen him stake his claim as one of the great British folk artists of our time. After fleeting appearances for each other on stage and in the studio, the Fence Collective members have finally released a record so long-mooted that it can be traced back seven years.

The year is 2006, the location London’s Barbican. Playing at a tribute show to mark the release of the namesake documentary ‘The Devil and Daniel Johnston’, Yorkston invited Crowley onto the stage, and inadvertently lay the foundations for their latest release My Yoke Is Heavy. The first versions of the eight-track homage were actually sold back in 2009 at the Fence Homegame Festival, though only 99 copies were produced on CD-R with a parcel tape sleeve. Remastered and complete with artwork and case, the spirit of Daniel Johnston is encapsulated with breathtaking minimalism.

Split into two sides of four tracks, the unfussy renditions do the living legend real justice. Opening track ‘True Love Will Find You In The End’ doesn’t capture the primitive sounds that Johnston’s early career version echoes, but manages to maintain the languid and melancholic tones. Crowley’s deeper vocals overlay reverberating piano, replacing the untidy guitar of the original piece.

The hurried, muffled ‘Walking The Cow’ is given a contemporary lick of paint and slowed to a walking pace, while ‘Don’t Let The Sun Go Down On Your Grievances’ swaps piercing organ for Irish Bouzouki and an uplifting breakdown finale. The traditionally low production value of Johnston’s originals has been interpreted through old portastudios, as Crowley and Yorkston recorded ambience from their respective homes, which includes church bells, analogue camera whirs and television audio through a baby monitor. It’s a touching tip of the hat to the lo-fi legend, recognising the crackles and clicks of old as vital as the lyrics and notes themselves.

A shared affinity for the work of Daniel Johnston has led Yorkston and Crowley to releasing this short mark of respect, for the influence the American songwriter had on the two is clearly reciprocated in My Yoke Is Heavy. Though Galway and Fife are far flung destinations from West Virginia, the weighty power of Johnston’s music continues to resonate in that shaky, inexpensive way we’re still accustomed to.