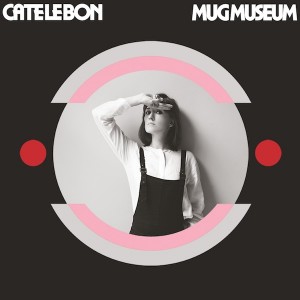 The latest offering from Welsh singer-songwriter Cate Le Bon, Mug Museum, is strangely timeless: it has clear retro, sixties influences, as if it’s playing on vinyl, but is full of fresh touches too. The guitar parts remind me of Dirty Projectors, the musing mood makes me think of Charlotte Gainsbourg. ‘I Can’t Help You’ is light, understated and lively, with little vocal trills, while ‘Are You With Me Now’ is beautiful, one of those satisfying, slowly swelling and uplifting songs I immediately want to play again, like a song from a pivotal point in a film: “I have no reason to run”. Although the core of ‘Duke’ is straightforwardly tuneful, there are flourishes, small strange unidentifiable sounds (like someone playing a kazoo, quietly) that give it a rebellious edge. Le Bon’s voice goes from liquid, cool, and echoing to playful high notes at the end. In ‘No God’ she sings (ironically?) as if she’s in church, rounding every word; the elocutionary, choral clearness of her voice is part of what gives Mug Museum an old-new feel.

‘I Think I Knew’ is a slow-dance duet, with sprite-like cascades of notes around the vocals: “there’s no boundary to devotion, no territory,” she sings, as if she’s writing a metaphysical poem. Le Bon’s lyrics are exuberantly weird; in ‘Wild’ she sings about “an island of hypocrisy”. ‘Wild’ is the most harsh track so far, in a psychedelic way (it reminds me of The Doors); the structure feels looser and more daring, after the tight opening of the album. ‘Sisters’ continues in this sprawling mood, bouncing along on an existential road trip: “I’m a sister, I won’t die”. ‘Mirror me’ describes a “skeleton lighthouse of honeycomb” to eerie organ, with uneasy strings in the background. ‘Cuckoo Through The Walls’ has a regular heartbeat of a drum around which oblique, unsettling lyrics flutter (“never leave the house, cuckoo through the walls, lay still on the ground,”), then lifts unexpectedly into a trill at the end.

Title track ‘Mug Museum’ ends the album as if with a spell, words that circle in sentences that don’t quite make conventional sense. They become a mantra, accompanied by piano and a creaking sound like someone rocking in an old wooden chair. “In my mug museum, I grow company from echoes, in my walls, I forget the detail, but know the warmth, tailor to the letter till it becomes, in my mug museum, in my mug museum…” it feels like an ode to crafting something with care, alone. Mug Museum draws you in with bright hooks, then reveals something more difficult and knotty underneath; all of it is rich, unpredictable and rewarding.