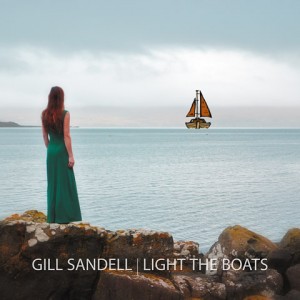 Light the Boats, released September of this year, is Gill Sandell’s second album since her well received 2010 debut Tarry Awhile. If Sandell hadn’t already established herself as one hell of a singer/songwriter, Light the Boats certainly sets it in stone for her.

First track ‘The Border’ opens the album beautifully; Sandell’s sweet vocal melody and tinkling guitar mixed with a darker, more sombre cello sound really sets the tone for the rest of the album. The last lines of the song, wistful and pensive, grab hold of your heartstrings: “Will you let me see coral tides?/Will you let me be, bonny eyed?” before you’re plunged into the shuffling drums of the next track, ‘Sparkle Eyes’.
This up-and-down, forlorn-yet-chirpy, wistful-and-whimsical feel is true of the whole album, as each track changes in tone and atmosphere, taking the listener along with it.

At its heart, the record’s tone becomes almost uplifting; the beats perk up a bit, the tempos quicken, and the melodies become more playful. With the likes of the chugga-chugga drums and fluttering accordion of ‘Forget our Fears’, it almost feels like a hint of happiness is about to break through. The content of Sandell’s lyrics, however, maintains a darkness of sorts, contradicted by her sweet songbird vocal delivery.
As the album draws near its close, we’re brought down into the whimsical ‘Wide-eyed Wandering’, throwing us back into the nostalgic feel of the earlier songs. Finally, ‘Old Whirlpool’, sensitive and slow, draws the album to a close.

The album is beautifully and thoughtfully crafted. Its poetic lyrics woven with expertly arranged compositions really make it worth sitting down and listening to. Sandell has excelled in creating her own breed of modern folk song, delicately laced with a more traditional folk feel.