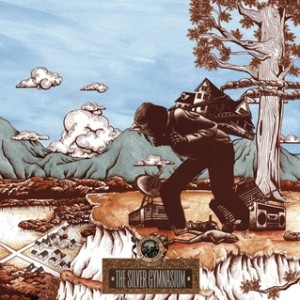 The Silver Gymnasium is a misty look back in time to singer Will Sheff’s childhood growing up in the small New Hampshire town of Meriden, circa 1986. The album cover is rather wonderful in its own right, coming complete with a map of the town and his memories marked on it, like an illustration in a child’s treasured book of bedtime stories. (And, to remind us that nearly everyone used to do this, the lyrics are printed on the reverse. This is a good thing, as some of the songs are so personal as to be impenetrable to the casual listener: Sheff is as much a writer as as a musician). The album explores his teenage years, friends and family like flashbacks in films, where the focus is a little blurred and one’s never quite sure exactly how the memory connects to the adult Sheff.

As with the best of Okkervil River’s previous half dozen albums, most of the music is approachable, at the rockier end of folk and in places mesmerisingly good. ‘Down Down the Deep River’ is up with the catchiest of the band’s songs, the guitar line bouncing along with horns, strings and backing vocals to decorate Sheff’s characteristically ferocious spitting out of lyrics that only just manage to fit into the melody, as if he has more to say than time to say it. Almost as good are the opener ‘It Was My Season’ and ‘Where the Spirit Left Us’, whose rises and falls will work particularly well live – (they are in Europe in late November, but with only a single date in the UK). Those of roughly the right age will find their own memories jogged throughout the album by the references to Walkmen, cassettes recorded from the radio with the end of the song missing, Ataris, VCRs and even old Fleetwood Mac songs.

As a long-standing Okkervil River fan who has never quite understood why they aren’t more widely played, I had been looking forward to The Silver Gymnasium and there is plenty there to make one sit up and listen, with tunes strong enough to carry the songs when one’s attention flags, and the band’s usual big and slightly manic sound. At the same time, I can’t escape the feeling that there is an unevenness to the quality of the album, especially as it progresses. The synth-led ‘Stay Young’, for example, has none of the subtlety of the earlier glimpses of small-town youth, telling us not much more than “it’s so sad when it’s gone” – Sheff doesn’t usually do banal, so maybe I am missing the point. And very occasionally, is there something grating about his delivery, just a little bit too much like the smug boy at school who wants us to know just how clever he is?

So I am looking forward to joining Sheff and Okkervil River on their exploration of lost innocence for a little longer, before being sure of whether this record is as good as it and its cover sets out to be.