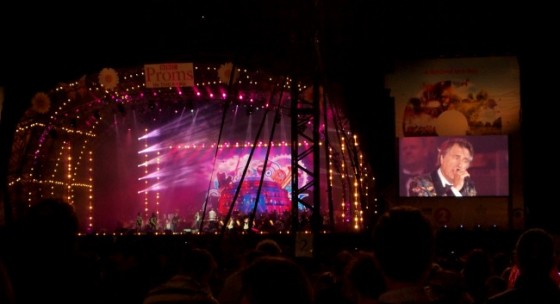 Probably Bryan Ferry wishes he was a bit cooler than headlining Proms in the Park. He almost definitely wouldn’t have done it in his Roxy Music days, but maybe he’ll take the screaming fans wherever he can get them now that his get up is paisley dinner jackets rather than leather trousers. And scream we did, as those distinctive vocals sailed through Ferry’s classics, backed by the BBC Concert Orchestra, an impressively energetic drummer and backing singers with voices that would put any X factor finalist to shame.

Bryan’s most recent album, ‘The Jazz Age’, is a collection of his songs re-recorded in the style of 1920s jazz, which is about as uncomfortable as it sounds. We heard the jazz re-working of ‘Love is the Drug’, and were greatly relieved when it morphed back into the familiar version. But there were plenty of hits to fill the set, and his cool edge was reinstated with an incredibly assured and vibrant ‘Let’s Stick Together’, to which we completely lost our cool edge, dancing along barefoot on a picnic rug, drinking from a box of wine and honking the saxophone part from the depths of our lungs.

Proms in the Park isn’t a place for looking cool, though. Just the presence of Tony Blackburn pretty much cements that. But take it for the fun day out it is and you’ll have a blast. And topping it off with a legend such as Ferry was a great move, because even burying as much music snobbery as possible, we needed something to cancel out the truly awful Red Hot Chilli Pipers from the other end of the line up.