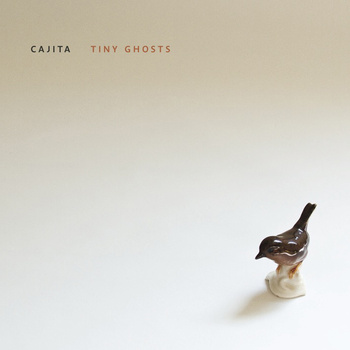 Jay Chakravorty is the man behind Cajita and, following support from the likes of Tom Robinson on 6 Music, the multi-instrumentalist is releasing his debut LP, Tiny Ghosts. Combining acoustic guitar, sweeping electronica and touching string arrangements, this is minimalist folk done solidly.

For the most part, he seemingly takes his cues from some of American’s best-loved; ‘Lungs’ has a vocal melody that is similar to that of The National and ‘The Swell & Sway’ has a washed-out atmosphere similar to Perfume Genius. Elsewhere, ‘You Will Be Missed’ is mostly instrumental but is the most relaxing and soothing track on the LP.

Chakravorty doesn’t have a particularly powerful voice but he uses his baritone style to good effect as it contrasts well with the higher-pitched backing vocals. Sometimes the end result is pure magic – the tender harmonies on ‘The Stars’ become ever so slightly more powerful as the song reaches its climax.

If there is one tiny gripe to be found, a lot of the album simply floats on by and it’s a little easy for the music to simply wash over you without striking a chord. But then, when you think you’ve sussed Cajita’s style, along comes ‘Broken Glass’. It is easily the most immediate and joyful song, all handclaps and brass with the odd bit of freewheeling flute thrown in for good measure. As surprises go, it’s an extremely pleasant one.

More moments like this would have given the album a lot more variety. However, that doesn’t take anything away from the fact that Tiny Ghosts is a promising debut that hints at a talented songwriter. Ultimately, if you take away all the extra layers, what you have are some very simple (albeit lovely) tunes. The extra touches he adds, sometimes so subtle that they become apparent on repeat listens, are excellent.

Tiny Ghosts is out on 28th July, but you can cop a listen of it now: