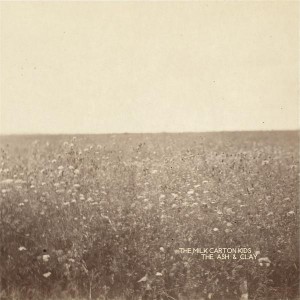 The Milk Carton Kids are Joey Ryan and Kenneth Pattengale from suburban Los Angeles. They sing pretty and gentle close harmonies woven around their two vintage acoustic guitars with no further accompaniment, and they are very good at it. Pattengale is generally the top part, full of nervous energy and an excitingly good finger-picking guitarist. Ryan is the calmer of the the pair, generally playing the anchor part with both voice and guitar.

The Ash & Clay is their second proper album together: they came across each other only two years ago, when each was struggling with their solo career and looking for something different. It’s a mark of their success that so soon it is hard to imagine either of them singing on their own, and equally so to ascribe ownership of any of the songs to one or the other. The two voices do indeed seem to fuse into one.

There are some lovely, wistful, folk-inspired songs on this record. The most memorable to me are the opener ‘Hope Of A Lifetime’, a lilting showcase for the harmony singing on themes of loneliness that is the Milk Carton Kids’ signature. Next, there’s a hint of menace added to the gentleness in ‘Snake Eyes’.

The title-track ‘Ash & Clay’ draws even more than the rest of the album on the Simon & Garfunkel influence, and mixes a gentle protest into the sadness. But most despairing of all is the last song ‘Memphis’, with its own nod to Paul Simon in telling us that “Graceland is a ghost town tonight”. The hope of the album’s opener has been extinguished in the desolation of its ending. Sad but lovely.

I imagine that listeners to this album will divide into two: a few will think that the Everly Brothers and Simon & Garfunkel roots show through far too obviously – why put this record on when you can have the originals instead? They will feel that some of the songs are only pleasant, and that taken as a whole they can sound too polite to have a cutting edge; they will say that anyhow the pair have picked a pretty horrible name. All of which is fair enough in its way.

But others, myself included, will find plenty of interest in their oblique lyrics, and feel that the superficially minimalist approach masks a wide range of variety and colour in the songs; those that see them live will find the songs leavened by Ryan and Pattengale’s deadpan banter between songs. And if their initially off-putting stage name of Milk Carton Kids suggests the weighty sadness of loss, then perhaps it’s about right after all.

The Milk Carton Kids will play London’s St Pancras Old Church on April 10th. Sadly, if you don’t have a ticket, it has SOLD OUT.