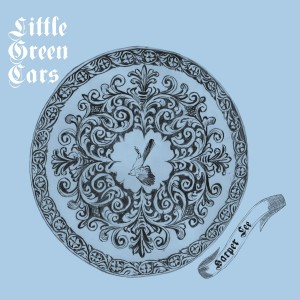 The keys are in the ignition and the engine is revving: Little Green Cars are on their way.

They are a five-piece band from Dublin who made it onto the BBC Sound of 2013 shortlist – as well as the lists of quite a number of national newspapers and radio DJs. The sound is an Irish-accented Americana, a sort of folk rock with a little more of the latter than the former, mainly strong melodies sung in accomplished harmonies and targeted at the mainstream. In keeping with the transatlantic theme, new EP Harper Lee follows last year’s single ‘The John Wayne’, and is an appetiser for upcoming album Absolute Zero. With Markus Dravs behind them as producer, they will be aiming for as many of the Mumford Babel-boomers as they can get.

Harper Lee is an undeniably catchy song and worthy single, building quickly into its driving chorus. Lead singer Steve Appleby has a thin voice, but he will be happy that he sounds on occasions a little like Neil Young. ’10 O’Clock’ stays in the same gear as the title track, although lacking its strength of melody and let down by some banal lyrics (the singer tells us that he doesn’t want to be a log in the fire, but would prefer to be a tree that’s still growing. Not a page in a book, but rather a whole book.) ‘Red’ is attractively sung a cappella, and leaves one wanting to hear more of the female vocalist Faye O’Rourke. She duly takes over for the final track ‘Spider Legs’, a quite different and rather eerie combination with strings and acoustic guitar that makes one wonder what side-roads Little Green Cars might go gown if they weren’t so clearly steering down the freeway headed west.