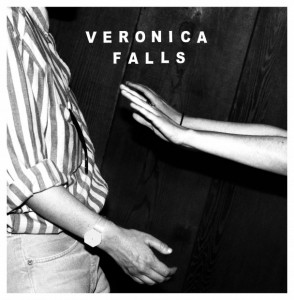 It’s only been just over a year since Veronica Falls released their infectious and delightful self-titled debut but nonetheless they’ve been quick to record a follow-up. Waiting For Something To Happen, on the surface, keeps hold of the same aesthetic that served them so well first time around but they sound more commanding than ever but with an added degree of confidence and maturity.

The direct album opener ‘Tell Me’ is a good indicator of what’s to follow for the subsequent twelve tracks. Its stories of romance are filled with strong melodies and superb lyrics as all moods – optimism, frustration, timidness – are conveyed throughout. They don’t come across so much as journal entries but more like heartfelt and honest pieces of dialogue between two lovers.

Their twee and jangly guitars still act as a masking device for the sadness and, whilst at times thumping and driving, don’t ever overshadow everything else. The only time this shield is taken down is on the short-but-sweet ‘Daniel’, showing them at their most emotive and bare. ‘Broken Toy’ stands out for being a perfect analogy of a fractured relationship. ‘My Heart Beats’ is exactly the kind of pulse-racing pop that’s needed to get through the dour opening weeks of the year whilst ‘Teenage’ and ‘Last Conversation’ are both equally spritely.

Fans of the Veronica Falls formula will embrace Waiting For Something To Happen with open arms and with good reason. Nearly every song is well crafted and catchy and it’s to their credit that they’ve been able to write a worthy follow-up to their debut. This might not be their definitive work but you can sense they’re getting a lot closer to it.