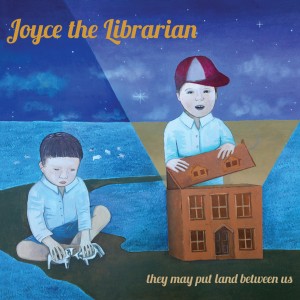 When Joyce The Librarian first found their way into FFS ears earlier this year, it took us a while to get over their wondrous name, the Stilgoe & Skillern song of a sex-starved book lender that inspired it, and all the thematic word plays that could be put into reviews on the back of it. While we briefly entertained ideas about writing this review without lapsing into them, that was never going to get very far.

And that is because the literary quality we first talked of back then is even more true of the debut album as it was of the debut EP. It’s not every day you hear someone turning the tale of Maurice Ward, a Yorkshire hairdresser who invented the secretive heat-shielding material Starlite in between trims, into a three-minute folk song.

Then there’s the hushed intimacy, the sense that Martin Callingham might even be singing these songs to you between the stacks at the back of the library, delivering them almost in a whisper to avoid detection. There is constant invention in their sound but you sometimes need to strain to hear it. They combine a vast array of instrumentation but never in some grandstanding sound, instead creating a subtle blend of guitars, trumpets, cellos, organs, and more besides.

Not that everything is so understated. ‘Land’, the stand-out of that first EP, still soars as it is elevated here to something of a title track. ‘Follow Me, I’m Right Behind You’ is a wonderfully catchy little pop song worthy of far greater attention.

‘Follow Me’ stands out here, though, as the exception rather than the rule. The hooks of most of these songs are far less obvious, the record much more slow-burning. It is best thought of, if you’ll allow us one final literary allusion, as a perfect record for a lazy Sunday afternoon curled up with a book.