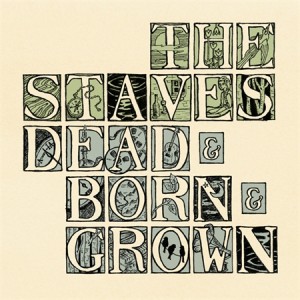 There’s been a lot of hype surrounding The Staves since they debuted their talents behind Tom Jones on his gravelly gospel album Praise and Blame. They made a name for themselves on the back of that performance with the Welsh legend, but now it’s time for them to be heard in all their glory.

What better way to wow their listeners – some maybe already familiar with their beautiful, silky and perfect harmonies – than starting the album a capella with opener ‘Wisely & Slow’, a sweet and soulful song merging into something all the more upbeat and eccentric.

The sisters, Watford’s proudest children, don’t disappoint with the rest of their debut, which is full of soft and winding harmonies reminiscent of the Joni and Crosby days with a bit of Norah Jones appeal in places. Occasionally, there’s a bit too much Radio 2 appeal, but the majority holds its own and it sets The Staves apart from other harmony girl groups.

‘The Motherlode’ is like Mumford meets Emmyloo Harris while the dreamy yet bluesy ‘Pay Us No Mind’ and the sun soaked ‘Facing West’ are tear-jerkingly lovely.

It’s the little quirks – the minor chords that creep in, the odd vocal cascade among a usually very simple melody, a rolling snare or faint sitar – that adds a little magic. Something like ‘Winter Trees’ could be a pretty, if not bland, little number if it wasn’t for these subtle gems, but with them, it turns the story into a fantasy.

it’s the same with ‘Mexico’, a track released on an EP earlier in the year. Lovely as it is, but placed among the others on the album only shows how far the band has come, moving their melodies on to something a bit more gripping like ‘Snow’, one of the best on this debut. It’s jolly, angelic, quintessentially English, but full of beans, lush with harmony, and has an innocence that is just so listenable, like a Simon and Garfunkel classic.

There’s definitely one prominent voice among the sisters, but it’s nice to pick out the differing tones of the others, who occasionally shine through with a more unusual harmony, like on closer ‘Eagle Song’ and it’s secret second half, harking back to those golden moments of Americana folk of the late 60s. What a way to end. Its two parts are beautiful and unique compared to the rest of the album, a bit folk prog, a bit of a rawer blues, much less Chris Evans breakfast show. In a way, it’s a tease of what might come next from these three siblings.