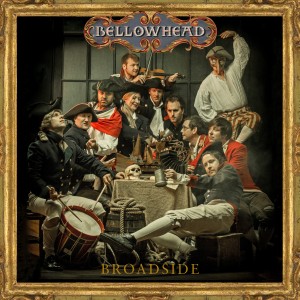 The first thing to say about Bellowhead’s new album is that Broadside is a great title. Referring both to circulating ‘broadside ballads’ of centuries gone by, and to the ‘broadside’ of a ship (that’s the side with the cannons ) – it tells us that Bellowhead are good at being lots of things at once: learned, well-read and intellectually brilliant; whilst also full-throttle, aggressive, guns-blazing. Both Dr Jekyll and Mr Hyde.

Broadside is both their most accomplished and most populist album to date. The arrangements sound even more ambitious than ever, the jazz breaks of their four-piece brass section even freer, their classical influences even more explicit – and yet, the overall impression is somehow more accessible – there’s more guitar, more rock, more fireworks, more funny production thingies on Jon Boden’s voice. It’s no coincidence of course that legendary pop producer John Leckie is still pressing the buttons.

Navigator Records seem (quite rightly) to be using Broadside to push Bellowhead to bigger audiences. Their opening rendition of ‘Byker Hill’ does pretty well as a statement of intent for new listeners, especially since it’s the kind of folk song (the only out-right club staple on the record) that’s widely known outside the trad scene. You’ve heard folk, it says, but here it is bigger, ballsier. But it’s also got a message in store for their core audience: all the noise, all the electricity. You’ve heard Bellowhead, it says, but here we are bigger, ballsier, attacking with our broadside facing forward.

Of course it’s exactly the band’s intellectual rigour – their vast combined knowledge of the tradition, their focus on interpretation – that makes the songs feel so punchy and new. Marshalling material from all over the place, and finding just the right mark to pin it to (and indeed what weapon to do so with) Broadside takes on sea shanties, child ballads, love songs, music hall and more besides. From the Peter Bellamy-sourced ‘Go My Way’ the band launch a cinematic, glob-trotting epic. From the crude comedy of ‘Black Beetle Pies’ (which to save you a nasty surprise on your sixth listen, is very much about venereal disease) they sew a creepy-crawly gothic performance in Halloween costume kitsch.

The most surprising arrangement of the bunch is their comic, vaudevillian take on the usually thoughtful ode ‘What’s the Life of Man’, whose chorus – ‘In this wide world we appear fine and gay/Like a leave we will whither and soon fade away’ – sits somewhere between the heavens mocking the sentimental mortals, and those same mortals partying like its doomsday. Life is indeed short and few of us can do everything at once – but we can do worse than take a listen to those who come pretty darn close.