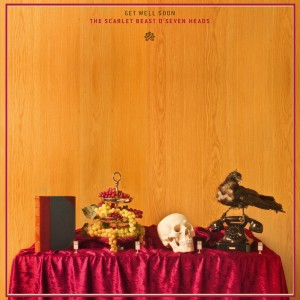 Get Well Soon is (essentially) Konstantin Gropper, a 29 year-old German composer, multi-instrumentalist and man of very vivid imagination. The fact that his new album is called The Scarlet Beast O’Seven Heads – with its sub-title translation of La Bestia Scarlatta Con Sette Teste – should surprise us not at all. He in interested in magic, myth and, more often than not, the end of the world. Despite his assurances that this record is supposed to be lighter and more summery than his previous ones (Rest Now, Weary Head! You Will Get Well Soon and the inexplicably shortly-named Vexations), the title is drawn from the Book of Revelations and the subject matter is once again apocalyptic and macabre.

The composition and most of the instrumentation is a solo project for Gropper, with his band just adding the finishing touches and joining him for live performances. He has achieved a certain international critical acclaim for his earlier albums, and comparisons that have been bandied about range from “the bastard child of Radiohead and Bright Eyes” to Patrick Wolf, Sufjan Stevens and Nick Cave. In truth, none of these quite hit the mark, as his music is unusual, sometimes startlingly so. The references that seem to come closer are those to Caspar David Friedrich and the Brothers Grimm, given Gropper’s taste for the gothic and for story-telling. The other constant them in The Scarlet Beast O’Seven Heads is cinema (for which Gropper has written scores) and in particular Dario Argento-style Cinema Italiano horrors: his subjects, song titles and often the music itself come from the world of film. The last time I saw Get Well Soon perform in the UK, they did so with a film as a back-drop, and it will be interesting to see if this is how it works again in their shows this month.

The high point of the album is the wonderful and bizarre ‘Roland, I Feel You’ (hard to listen to without being transported to lazy weekend afternoons in front of old movies), complete with cabaret brass and its sweeping chorus of “Hold tight, get a grip, the whole world is going to hell”. The song has an accompanying video that is frankly bonkers and well worth seeing if only to work out what on earth is going on. Other highlights come at either end, with a stately slow-march ‘Prologue’ setting the tone of melancholy and mystery for what follows; and the finale of ‘You Cannot Cast Out the Demons, But You Might As Well Dance’, an anthem whose driving rhythm is cut with spoken clips of forlorn Hitchcockian heroines. In between, there is all sorts of glorious nonsense set to lilting melodies and with spiralling choral or electronic backgrounds – even if some of it is a little undermined by the indistinctness of the lead vocals when Gropper sings falsetto or when the music is at its most feverish. It would have been nice, for example, to know more about what happens in the song named after ‘Henry Darger’. Sometimes the music lightens, as in ‘A Gallows’ – but with a title like that, you know the light won’t last for long.

There will be some for whom this album is all a bit too baroque, who will think it pompous and contrived. But for those who can live with the eccentricity and prepared to suspend disbelief, the music is enthralling and has a certain grandeur about it. It deserves to bring Gropper and Get Well Soon popular as well as critical success.