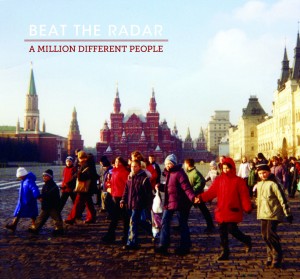 If sophomore album A Million Different People is your first introduction to Beat The Radar, it shouldn’t take you long to hear why these Cumbrian lads uprooted themselves and moved to Manchester a few years ago. The city’s musical ghosts are alive and well on this joyful album, which strips indie back to some of its finest post-punk traditions.

Jonny Swift’s abrasive vocals might not appeal to all, but their sound is in Manchester’s rich tradition, and the raw edge and low production is a feature rather than a limitation. What production techniques cannot disguise are the soaring tunes. With songs like ‘Eyes’ and ‘Delighted’, this is stuffed full of catchy hooks you’ll be humming hours after the record has finished. The album begins with an impressive array of tunes worthy of single status wrapped around the brief interlude of the serene ‘Moscow’. Then after the swirling assault of Cowboy there’s a softer sound to the end of the album, from the soft shimmering ‘Oswald Road’ and the lush ‘Sleeping on the Moon’ before the triumphant title track closes it out. Beat The Radar’s reputation may have been built on their live shows in and around Manchester, but there’s no lack of punch when set down on record.