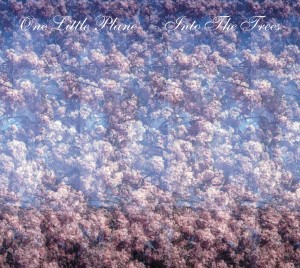 One Little Plane, a.k.a. Kathryn Bint, is often described as ‘gentle’, ‘soft’, and other words familiar to folk fans, but her second album shows that she can set herself apart. Into the Trees begins with ‘She Was Out In The Water’, a song of knowing, disconcerting sweetness, all glitter and undertow. It’s a compelling opening, but the following track, ‘Nothing Has Changed’, is disappointingly generic in comparison, ticking the same boxes as pretty much any soundtrack of dewy angst in teen romantic comedies from the last twenty years. There is something comforting about this formula, but it’s clear that so much more is possible, a greater range and flexibility, the further Bint goes into the trees. ‘Hold You Down’ enters complex, satisfying territory; she shines when she pitches her calm, insouciant voice against darker tones, like someone walking on tiptoe in a sunny room, casting a long shadow.

One Little Plane’s understated contentment can be refreshing, making it all sound easy; ‘Bloom’ is lovely, Bint duetting with delicate synths. I then get impatient with the more predictable prettiness of ‘If You Ask’ and ‘Simmer Down Simmer’, only to be startled by ‘I Know’, which is something of a breakthrough. It’s as if Bint just listened to the entire back catalogue of Nirvana for the first time; suddenly her voice has an edge to it, reminiscent of PJ Harvey’s brittle girlishness in certain songs. This doesn’t come across as affected at all, more as an honest experiment that pays off: the volume goes up. Gentleness is not always timid (see: This Is The Kit) and it’s great to hear Bint branching out. Into The Trees is young, in a positive sense; you can feel the growth of her sound, a strengthening core.