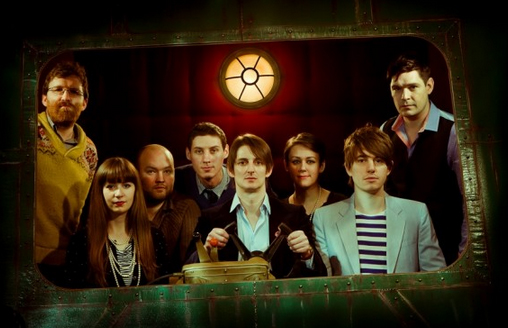 It’s a skeleton version of the Leisure Society that support Laura Marling on her Cathedral tour, and without bass, drums or cello, Helen Whittaker’s flute and Mike Siddell’s violin sing out over guitar and keys. In a set-up missing its lower register, deep piano chords provide the darkness and balance.

‘Our Hearts Burn Like Damp Matches’, from Into the Murky Water, stands up to scrutiny stripped of its polyphonic orchestration. The flavour of the song is changed, it’s more deliberate and careful, with every note emphasised.

Highlights of the set are ‘The Last of the Melting Snow’, where a gentle guitar waltz is joined by sumptuous piano chords and a cover of Erasure’s ‘A Little Respect’ with brill harmonies that Andy Bell should probably just adopt.

The set closes with a drum machine-backed version of ‘Save It For Someone Who Cares’. The speed of sound is not on the band’s side, as they encourage the audience to clap. But it’d take more than a fraction of a second’s delay to dissuade the vicar at the end of our pew from tapping his toe.

Setlist
1. We Were Wasted
2. A Short Weekend Begins with Longing
3. The Last of the Melting Snow
4. Although We All Are Lost
5. Our Hearts Burn Like Damp Matches
6. Erasure – A Little Respect
7. Save it for Someone Who Cares