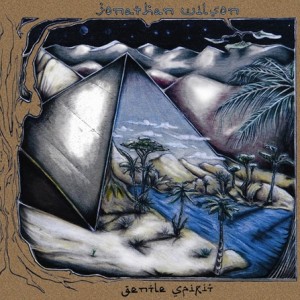 Jonathan Wilson is clearly someone who appreciates that there’s a lot wrong with the world today. Gentle Spirit is, in his own words, an attempt to “give humanity some kind of reverence-laden soundtrack”. The North Carolinian shouldn’t be derided for his sincere efforts. However, championing a new respect for the world doesn’t necessarily have to sound so, well, respectful.

Sometimes, Wilson completely misfires in his valiant efforts to add some ‘big issue’ relevance to his writing. A protest song, only with a chorus written by Black Eyed Peas, ‘Can We Really Party Today?’ and its refrain of “with all that’s going on?” is, far from being a wake up call to Westerners with their heads in the sand, the low-point of the album. At least you can say Wilson is successful here; with the patronising rhetoric repeated for a dreary 6 minutes, it’s likely you’ll never want to party ever again.

However, after tripping up so monumentally early on in the album, there’s a lot of time for Wilson to regain some dignity. ‘Desert Raven’ takes America’s ‘Horse With No Name’ as a template and captures its mood to a tee, with the help of some woozy guitar lines. And, as Wilson’s lyrics fill with colour – reds, blues, greys, saffron – so too does the music.

Suddenly we go on a journey through various different offshoots of rock, from country to psychedelia. Often, as foot meets feedback pedal, and late-Beatles era McCartney basslines begin to throb above Wilson’s languid vocals and trippy drum rolls, echoing Pink Floyd’s ‘Echoes’, the listening experience is akin to
being in a time-warp.

But far from being satisfyingly disorientating, everything here fits neatly in place, never threatening the listener. It’s very much easy listening throughout, while Wilson relies on the tried and tested hallmarks of rock. Wilson takes ‘risks’ in the sense that they’re risks already taken by previous artists, with the intermittent blasts of electric guitar seen on ‘The Way I Feel’ very much Neil Young’s trademark.

Wilson makes a relaxing sound but, in music, vital issues need to be raised by equally vital singer-songwriters. On the evidence of the 80 minutes here, Wilson is far too much a gentle spirit to ever become one.