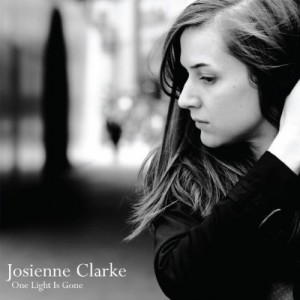 Everything about Josienne Clarke’s music, whether live or recorded, is proper folk. Her debut album One Light Is Gone resolutely champions an authentic acoustic sound and instantly gained heavy rotation on this listener’s daily commute.

Josienne’s songs are traditional and sound like they could be from the sixties or seventies, or long, long before- which really means they are classic and absolutely means you should listen to them. Josienne’s voice, which is mesmerising live, is similarly hypnotic on this album, it’s full of texture and emotion but never falters and never sounds frail.

Ben Walker accompanies Josienne on the acoustic guitar throughout the album and the guitar line is a as complex and atmospheric as her voice – more so than on many recent records the instrumentation is an absolute companion to everything that is happening throughout the songs. ‘How to Tame a Lion’ is particularly enhanced by a slight twinge of Americana , ‘Midnight Moon’ is sadder and more wistful for the guitar’s clarity and sympathy (the cello on this track is also beautiful) while ‘By the Fire’ is given an urgency and atmosphere by the flamenco guitar that absolutely changes the song,

Josienne and Ben’s music in general and One Light Is Gone is particularly at its best when it is simple and slower. The title track stands out especially, more optimistic than many of the quieter songs. This album instantly becomes one you will tell others to listen to and one you put on to work to in the middle of the night. Josienne Clarke (and Ben Walker) deserve to be far more widely known.