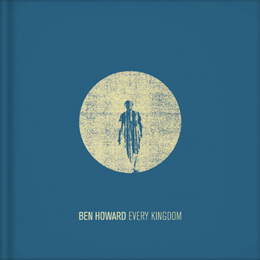 If you weren’t lucky enough to be part of one of the many festival crowds Ben Howard has been thrilling this summer, within the first listen of Every Kingdom you’ll be transported to a (briefly) warm Friday afternoon in the Sunrise Arena deep in the woods of Latitude festival *insert alternative festival anecdote here*. I for one am grateful, as Summer has passed and I need a few cracking albums to take in to Autumn so that I can keep with me how darn fabulous it was.

Every Kingdom made me want to quit my job, grab a surf board, up sticks and move to the West Country (this coincided with a weekend in rural Devon to be fair, although I’m not clear which had the greater influence). As yet I have resisted. Although many things, Every Kingdom is not a surf tutor. The album is well constructed, the first track gearing us up for summer reminiscence. The ideas are simple, but familiar and reassuring also. “I’ve come to know that memories were the best things you ever had.” We all know it, but sometimes it takes a specific event, or a great songwriter, to remind us. It’s a familiar sound, more Damien Rice than Bob Dylan, but his music has a freshness and positivity to it whilst avoiding sounding corny.

Howard took more of a risk than your average musician leaving a journalism degree only six months shy of graduating. His attitude, which resonates throughout the album is ‘the most beautiful lives are the ones that take risks.’ It’s impossible to listen and not feel that same way. It’s infectious. In The Fear he sings about living in the confines, reminding the listener (and perhaps himself at the same time) that life is too darn short for that. It can be no coincidence that the following track Keep Your Head Up is about following your own path and how much more bearable life becomes when you stop worrying about other people and concentrate on what makes you happy.

They are songs which are clearly written for live performance, call and response employed particularly well in The Wolves. An audience loves a sing-song, that’s for sure. The near constant touring these past months has undoubtedly added to Howard’s loyal fan base. I am sure I’m not the only one to sadly miss out on a further show this year, I’ll know for next time that Ben Howard fans don’t let the grass grow. Quite rightly too. He’s just as hard working on stage as the tour calendar suggests, and he’s found time to produce a solid album too. This will keep me warm in to the Autumn as the weather ceases to do so.
Words: Hayley Brunton