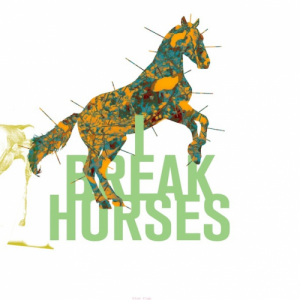 If I didn’t know any better, I’d say I Break Horses have been created by a fiendish group of artists simply to confound music critics and disprove our own, limited art. As an explanation, here are the facts about the band as they stand:

So, as a lazy reviewer with pretensions of music knowledge and creative thinking, I will offer you my uninformed opinion of I Break Horses’ debut album, Hearts:

‘Hearts is a curious mix of the brute force of classic shoegaze noise and the Swedish tendency towards lilting, pop melody – think My Valentine (Bloody) or the Björn and Agnetha Chain.’

To be honest, to a certain extent, Hearts is essentially just that. All of those elements (stupid band name reconfiguration notwithstanding) are certainly present and more certainly curious. But the experience of listening to Hearts is far removed from simply discussing it. You see, the limitation of music criticism is its innate inability to explain the true form and flow of a great album, the way it takes you from one place to another in an entirely sensuous fashion, quite apart from any process of thought that may go along with it. And this is why Hearts succeeds in what I believe to be its insidious quest to bring down music criticism from within. The band are Trojan Horses if you will (hur hur).

If you, like me, take the facts into consideration then from the outset you will be confused. ‘Winter Beats’ opens the album with ascending, stadium-sized synths growing from seed to stem to great big anthemic tree. Shoegaze is not about anthems. Swedish pop music is not about anthems. But somehow the two combine to make one – this is rousing, huge music that simply doesn’t let up, so much so that instead of simply ending, its outro becomes the title track’s intro, at which point the shoegaze takes over, those synths are pushed into fuzzy overdrive, vocals become indecipherable and your ears break. As what is essentially a two-part, multi-genre, eight minute song comes to an end it resolves in a monotone blare of brass. This is weird.

Blissful confusion reigns throughout Hearts. ‘Wired’ is a chugging guitar and drum rhythm monster aided by a glittery synth reprise, ‘Cancer’ is a shimmering, shuddering dirge that sounds like Beach House performing a funeral march and ‘Empty Bottles’ could be (and, I imagine will be) the soundtrack to a particularly tearjerking redemption in an indie rom-com. Probably in the rain. Every track is long enough to challenge your opinion of the album as a whole in some way, but it never feels disconnected, primarily due to Maria Lindén’s sweet, resonant vocals which, although cloaked by noise most of the time, act as the one stable element, drawing every changing sound in around them.

You could ask, if the whole point of this review is to explain why music reviews are limited by the use of language, and particularly limited in this case, why I bothered to write one at all. Good point. However, my (albeit possibly impossible) remit is to sufficiently explain why a review of Hearts is representative of only half of the response you’ll get from it. You will, like me, be forced to think about the music – its origins, the results of those origins, and the results of those results – music like this is simply not being made elsewhere. However, you will, in listening, be swept over with sensations that I can’t hope to describe – big ones, happy ones, awed ones. The results of great music are most often emotional and sensual before thoughtful and, it cannot be overstated, Hearts is great music. Listen to it and find out what I mean.